Home Sport Rafael Nadal: “Now we have to reduce euphoria and rest” 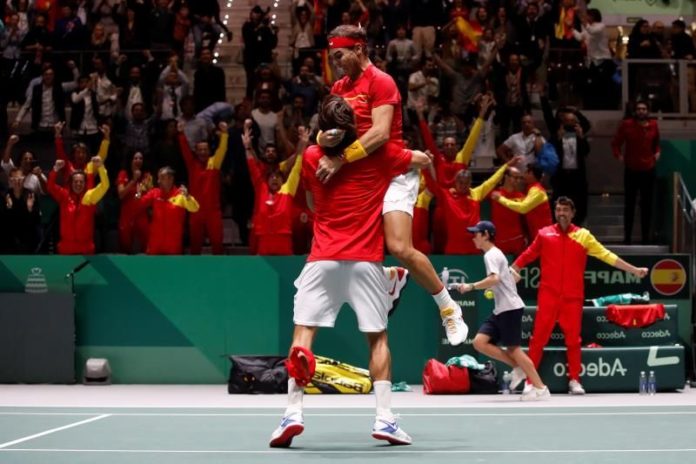 Rafael Nadal said this morning, after beating Britain and qualifying Spain for his tenth final of the Davis Cup, that now we had to reduce euphoria and rest because Canada waits with more time to regain strength.

“Canada rested yesterday (on Friday) and today has played at half past ten in the morning. We will go to bed like yesterday at four twenty-four. We need to go to rest,” Nadal said.

“They are moments of high adrenaline and great happiness, but also to reduce euphoria because, if not, tomorrow we will not be prepared enough. They are playing at a high level and we have to do our best,” said number one Spanish.

“We have won one more qualifier, we have not won anything. It is a great achievement and I do not know if there are many teams in which the five players have participated, and that adds a little more value,” he said when assessing the success of the team.

“Winning as a team is much more satisfying. Losing is less hard but when winning, shared joy is something difficult to explain in a sport as individual as ours and is more appreciated,” reasoned Manacor who described the moments lived in the Magic box unforgettable.

“I have lived here, individually, unforgettable days. The support in Spain is for me unbeatable, and personally they have not been able to treat me better, and especially in Madrid. But in teams we lived a special moment in 2008 in the semifinals (against the USA in the bullring of Las Ventas), but here it is every day, one after the other, “he recalled.

“In any nonsense of life, when we get angry, we realize that it is nothing compared to Roberto’s. He is a great inspiration and can have him with us, play or not play. But he is back with us is amazing , because in these very complicated moments, wanting to return with us means that we have to thank him a lot, “he said.

“The advantage of not playing many doubles is that you don’t have many automatisms,” he said of the match with Feliciano. “I think we have come together well, we have made a solid game, we have not broken but we have not done it and we have taken it to the tiebreaker, and there everything is played,” he said.

“Nervous factors and successes enter. We are very happy, and it is a pleasure to share a track with ‘Feli’ at this point in our careers,” Nadal settled.

Luis Suarez: “If you do what to Busquets, I consider my...