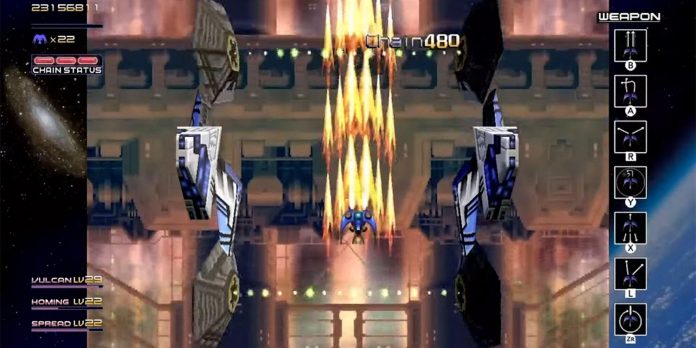 During the Nintendo Direct demo on September 13, the unexpected release of Radiant Silvergun on Switch was announced, and the game became available for purchase and immediate play. However, since then, the mystery has begun. Although some people were able to buy the game and even upload gameplay videos to YouTube or other social networks, Nintendo’s English-language trailer for Radiant Silvergun has since been removed. Similarly, the game can no longer be found in the Nintendo eShop, where it was sold for $19.99.

Perhaps the announcement was made too early or a problem was discovered in the game that required its removal from the store. Almost four years ago, back in 2018, there were rumors that Radiant Silvergun could get a Switch port. More recently, it became known that a new version of the game will debut at the Tokyo Game Show 2022, which begins on September 15 this year.

Before Resogun, there were 2D shooting games or shooters like Radiant Silvergun. Before his disappearance from the online store, the commercial explained that the game has 23 bosses and six “very difficult” stages with different topography for navigation. Radiant Silvergun stands out among other arcade shooters with vertical scrolling thanks to the strategy needed to get big points. Enemy spaceships come in three different colors — red, yellow and blue — and each color earns the player a different number of points. Chain destruction of enemies of the same color increases the bonus received, as well as increases the effectiveness of weapons used against them.

Developed by Treasure in 1998, Radiant Silvergun was initially only available in Japan in slot machines or on Sega Saturn. Only in 2011, when Microsoft moved it to Xbox Live Arcade on 360, the shooter became available to other players. Radiant Silvergun was generally a success with the Western public, although not at all. Since then, some have called it one of the greatest shooters of all time, and the original was successful enough that a spiritual successor called Ikaruga was released in 2001.

For those who couldn’t get the Radiant Silvergun from the Nintendo eShop before it mysteriously disappeared, maybe the ad was just meant for the Tokyo Game Show, as previously rumored. This means that you can only wait a couple of days before it is available again. Otherwise, both Radiant Silvergun and Ikaruga can be purchased and played digitally on Xbox One and Xbox Series X/S.

Radiant Silvergun is available on Sega Saturn and Xbox 360, and the Nintendo Switch version was announced on September 13, 2022.