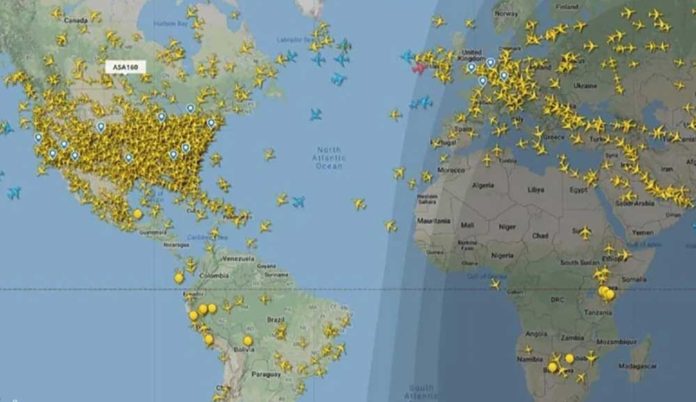 In the USA, which ranks first among the countries most affected by the coronavirus epidemic spreading worldwide, the number of deaths increased by nearly 2 thousand in the last 24 hours and reached 13 thousand. In the country where the air traffic in the airspace was reflected on the radar, doctors warned especially on the high level of domestic flight traffic. If flight traffic continues in the USA in this way, it was predicted that the number of coronavirus cases would increase.

In flightradar application, where instant information about air traffic can be reached, aircraft traffic in other countries decreased.

Within the scope of coronavirus measures, the aviation industry is experiencing the biggest crisis in history. In order to prevent the spread of the epidemic, flights were stopped in many countries. While there is a decrease in the air traffic of many countries worldwide, it was observed that flight traffic in the USA is very high compared to other countries.

Flight Traffic to Europe Suspended
US President Donald Trump announced that they suspended all flights from Europe last month for 30 days, and that Britain was exempted from this. According to the data of Johns Hopkins University, the number of people infected with the virus has increased to 399 thousand 929 with an increase of 31 thousand 480 in the last 24 hours, and the number of those who died increased by 1918 to 12 thousand 911.

‘Survival Kit’ Created In 2013 And Adapting To All Conditions