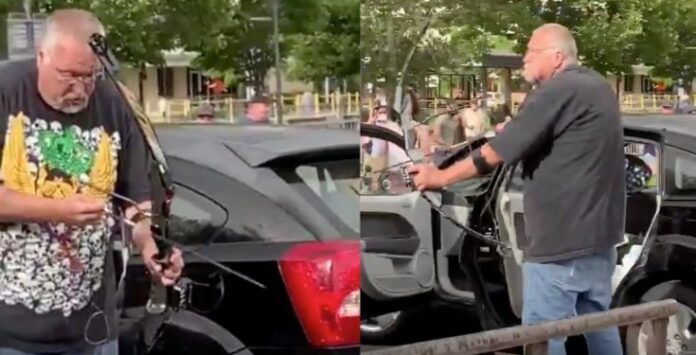 In the USA, where the reaction of the black citizen George Floyd to be strangled by a racist policeman has spread, a man trying to shoot the protesters and attack them with a machete. Stopped by the protesters, Brandon McCormick was briefly detained and released.

The incident, the images of which were viral on social media, occurred in Salt Lake City, Utah state. Brandon McCormick came out of the car with a bow and arrow in the traffic, which was interrupted by actions. According to the New York Post newspaper, in response to the slogan “The life of blacks is important” used by anti-racist protesters, he said “All lives are important” and then moved to the arrow shooting position. Meanwhile, many protesters who noticed him jumped on the man and made him ineffective.

A civilian brought a hunting bow to the #slcprotest and began shooting it at protesters. pic.twitter.com/UYZFtISb9I

An activist at the scene said, “He got out of his car, shouted” Enough is enough “and targeted the crowd before people stepped on him. He was yelling at me, then pointed the arrow at a black man behind me. ”

WOW: Man in Salt Lake City pulls bow and arrow on protesters blocking traffic and the protesters swarm him, disarm him, assault him then break and flip his vehicle.

An image was also shared on social media where McCormick landed with a machete against the protesters. It was announced that McCormick was detained for a short time after this incident.

Speaking to a local television station later, McCormick claimed that two black men attacked him in the car and removed his “weapons” for this reason.

The bow and arrow wielding dude forgot to say he was brandishing a MACHETE and threatening YOUTHS. pic.twitter.com/RBFO7AA9qg

Mini-Me: Jörn Schlönvoigt brings his daughter to the set of GZSZ!