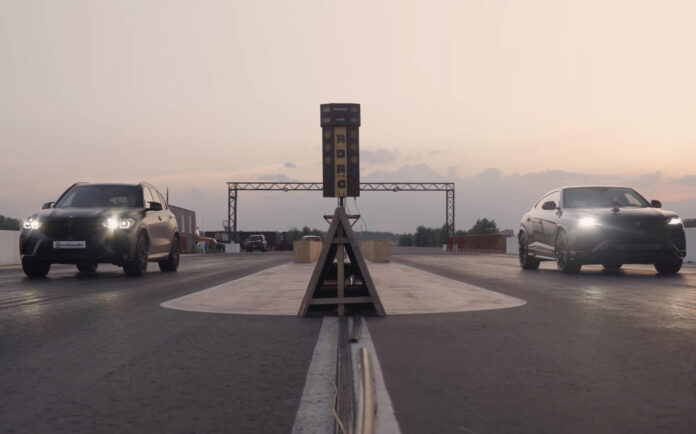 Lamborghini Urus and the BMW X5 M, two of the world’s most luxurious SUVs, came face to face with blood, this time. These two ultra-luxury SUVs shared their trump cards on the track by doing drag racing.

Lamborghini Urus, one of the fastest and most luxurious SUVs in the world, faced the track with BMW’s legendary SUV vehicle X5 M. Lamborghini Urus manages to get ahead of Bentley Bentayga and Rolls-Royce Cullinan, which are now on the market in terms of design and power and are considered the world’s most luxurious and powerful SUVs. The Lamborghini Urus, originally designed to be a military vehicle, features a 4.0-liter twin-turbo 8-cylinder engine and 8 forward gears. When we look at the Competition model of the BMW X5 M, which was also introduced this year, a 4.4-liter twin-turbo engine with 8 cylinders and 8 forward gears welcomes us.

The price of Lamborghini Urus starts from around 200 thousand dollars, while the BMW X5 M Competition is offered for sale at around 114 thousand dollars. A competition was organized between these two vehicles recently through the Russian-based YouTube channel KICKDOWN. How did the ‘drag’ race between these two vehicles end, let’s have a look together.

Unfortunately, since the entire video is in Russian, it is not possible to extract anything from the spoken words, but the mentioned drag race starts in the 40th second of the 12th minute. Although the BMW X5 M came to the fore during the take-off, Lamborghini Urus succeeded in overtaking the X5 M and winning the race by using its extra horsepower advantage very well. While the 8-cylinder engine of the BMW X5 M produces 617 horsepower, Lamborghini Urus’s 8-cylinder engine can produce 641 horsepower. It is no surprise that Lamborghini Urus, which has both extra horsepower and has reached speeds of 305 kilometers, is considered the fastest SUV in the world, and wins the race. In addition, Urus has a weight of 2,200 tons in terms of weight, while the BMW X5 M Competition has a weight of 2,300 tons.