Home Entertainment Quotes from the Obi-Wan Kenobi series with a deeper Meaning (which You... 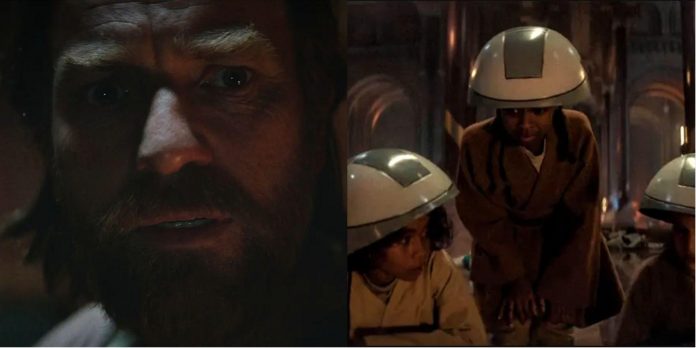 Warning: Spoilers Ahead For Obi-Wan Kenobi

Despite feeling as though it only just began, Obi-Wan Kenobi is over and may well be the last time fans see Ewan McGregor and Hayden Christensen share the screen as Obi-Wan and Anakin again. The show gave Star Wars fans a lot to love, including some lines that will be remembered forever. While some quotes can be appreciated or understood by all immediately, some go a bit deeper and maybe a bit slow-burning.

Whether they speak about things from the extended canon that more hardcore fans are aware of or whether they are lines that cannot be fully appreciated until episodes down the line, deeper meaning can be taken from multiple quotes in the series.

“The Braver You Seem, The More Afraid You Are.”

Reva ended up having an interesting half-redemption in Obi-Wan Kenobi, with Moses Ingram delivering an excellent performance – especially in the finale. This early line to Leia, one of Reva’s best quotes, may have been taken at face value in the show’s fourth episode but proved to be a line reflective of her character.

Reva worked against Vader in the long run, driven by hate, anger, revenge, and fear. That fear would lead her to be bold and overzealous in her pursuits, and when she tells Leia that her bravery makes her more afraid, the same could be said for her. She was scared of Vader – as most are – and the closer she got to him and her ultimate goal of vengeance, and the braver she got, the more that fear would present itself.

The Grand Inquisitor Speaks On What Partially Fuels The Dark Side

“Revenge Does Wonders For The Will To Live, Don’t You Think?”

Rupert Friend put to bed any criticisms of the Grand Inquisitor’s design in the show with his great performance, which is a fitting counterpart to Jason Isaacs’ fantastic effort. When he returns ‘from the dead,’ the Grand Inquisitor has a few great lines, including this, which comes after his inadvertently hilarious “Hello.”

Pau’ans have two stomachs, so the Grand Inquisitor likely could have survived without revenge assuming he had some good medical care, but there is no doubt that revenge played its part in his quick recovery. However, this comment by him is something seen throughout Star Wars. Not only does Reva go on to do it moments after the quote, but Maul, Obi-Wan’s greatest rival, famously survives being cut in half by Obi-Wan through hate and a lust for revenge. This is not just a fleeting, cool-sounding comment by the Grand Inquisitor but an accurate statement on the power of the dark side.

Connecting With The Force

“Only When The Eyes Are Closed Can We Truly See.”

This is a line spoken by Obi-Wan, read by him from carvings on a wall by someone who has used the Path. It is a quote that audiences can see has a deeper meaning, even if they interpret it differently.

Perhaps the most obvious lens through which to analyze this quote is the Force. When Jedi meditate, ponder over things, and look through the Force, they often close their eyes. Look at Qui-Gon during the Duel of the Fates or Yoda in The Clone Wars during his attempts to speak to Qui-Gon. Force users also sometimes close their eyes to concentrate on a Force power (such as Luke during his Force projection). The quote appears to be echoing what Obi-Wan tells Luke in A New Hope; eyes can be deceiving, and it is better to trust in the Force.

“Kenobi Means Nothing. I Serve Only You, My Master.”

After being bested by his former Jedi mentor, Darth Vader goes back to his castle agitated, anxious to get Kenobi back, but is questioned by Darth Sidious about his attachment to the past and Kenobi, to which Vader responds with this.

This quote is more than simply another dedication to Sidious from Vader, but an explanation as to why Vader does not seem to exhaust resources hunting Obi-Wan down between this show and A New Hope. He puts on the facade of letting go of the past (despite his visions of it in the form of Padmé, etc.). This also seems to blend well with his calm demeanor in A New Hope, which juxtaposes how emotionally he acts throughout this series in his quest to destroy Kenobi.

Beru Takes A Dig At Owen

“Whose Fault Is That?”

Owen and Beru did not get a ton of screentime in Obi-Wan Kenobi. Still, they made the most of what they did have in the show, and both characters are massively improved by this show, particularly in the finale, in which Beru gives this line to Owen who announces that Ben had left.

He must be trained.

Check out this clip from @ObiWanKenobi, and start streaming the two-episode premiere this Friday on @DisneyPlus. pic.twitter.com/C1G4H55I15

To fans of just this show, this quote will seem as though Beru had known about Owen and Obi-Wan’s disagreement in the premiere and other disputes before then. Comic fans will know this to be like a one-sided rivalry in which Owen tells Obi-Wan repeatedly, no matter what he does or how much he protects them, to leave Luke and the Lars family alone. Beru’s assumption that he left because of Owen makes even more sense. It runs deeper than solely what is in the show.

One of the biggest Star Wars ‘what ifs’ is what if Leia was trained and not Luke? Leia’s Force sensitivity was always there, even inadvertently teased in the original trilogy before its reveal in the sequels. This show also seems to do teasing of its own.

In one of many scenes that beautifully showcases how Vivien Lyra Blair captured the essence and energy of Leia Organa, she berates her rude, elitist cousin. She seemingly senses his fear of his father and his need to be liked by him and be like him. It may be more than just a showcase of Leia’s fierceness that is depicted so perfectly by the late, legendary Carrie Fisher, but a possible look at her being attuned to the Force.

Someone Was Stupid Enough

“No One Would Be Stupid Enough To Attack Them.”

While Obi-Wan is on Jabiim and discusses rescuing Leia from Fortress Inquisitorius, Roken remarks that nobody has seen inside because nobody would be that stupid. This makes the Fortress seem threatening but is also a funny moment for Jedi: Fallen Order players.

That is because Cal Kestis was stupid enough to infiltrate the facility, and he lived to tell the tale alongside BD-1 and Cere Junda. More than that, though, this quote seems to say that Cal did not use the Path and meet the likes of Roken, at least not to this point. Jedi Survivor has been revealed to take place at the same time as this show, so it will be interesting to see if the Path pops up.

Many Star Wars fans rejoiced when Obi-Wan read the writing and asked the question, “Quinlan was here?” to Tala. There will have been many casual viewers aware of Quinlan but perhaps not aware of him beyond being simply a Jedi.

Quinlan was a maverick and has been a well-known and often speculated about Order 66 survivor for a while now. He was also a good friend to Obi-Wan, shown in The Clone Wars and Dark Disciple. Not seeing him in Obi-Wan Kenobi was certainly not disappointing, but fans are definitely itching for his inevitable return.

“Then You Will Die.”

The final duel between Obi-Wan and Darth Vader in the show’s finale was thematically terrific and a rematch worth the wait. It checked so many boxes, including having the most heartbreaking Rebels callback possible that non-Rebels fans would have missed.

With his helmet damaged just as it is against Obi-Wan, Vader tells Ahsoka this same quote in the epic Rebels episode “Twilight of the Apprentice,” inducing goosebumps and tears from audiences. These are the two people who survived the Clone Wars era that he cares for most, and they could not save him. These two moments and duels will live on, not just as all-time great pieces of Star Wars, but as critical moments in the stories of all three characters.

Grey’s Anatomy: The 3 Most Toxic Behind-The-Scenes Moments From ABC’s Medical...

The spooky trailer for Stranger Things season 4 has arrived!