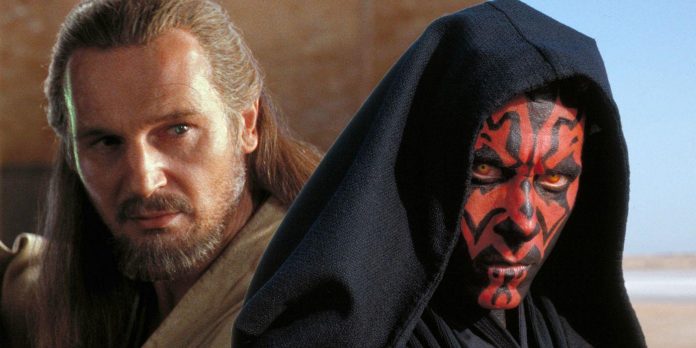 Star Wars revealed that the Ghost of Qui-Gon’s Power was trying to redeem Darth Maul after the prequel trilogy. Qui-Gon Jinn was a unique Jedi who lacked the arrogance that the rest of the Order cultivated, and who was willing to learn from other traditions of the Force. His knowledge of the balance meant that Qui-Gon was the only Jedi who could stop Darth Sidious—so much so that he already suspected something was amiss in the preparations for the invasion of Naboo. No doubt this was another reason why Palpatine decided he had to die and sent Darth Maul to kill him.

Darth Maul succeeded by killing Qui-Gon Jinn. But neither he nor Palpatine knew that death would not be the end for Qui-Gon Jinn. The Jedi Master learned the secret of becoming a Force Ghost; it took him a while to figure out how to interact with the physical world again, but towards the end of the Clone Wars, he began appearing in front of Master Yoda, offering to teach him the same skill. As he explained to Yoda in an extended scene of Matt Stover’s novelization of Star Wars: Episode III — Revenge of the Sith, conquering death is “the ultimate goal of the Sith, but they will never be able to achieve it. liberating yourself, not elevating yourself. It comes through compassion, not greed. Love is the answer to darkness.”

In Lucasfilm’s latest Star Wars anthology, Stories of the Jedi and the Sith, it is revealed that Qui-Gon visited Darth Maul again some time after the events of Star Wars: Episode III — Revenge of the Sith. In one of Michael Moresi’s short stories, “The Ghosts of the Maul,” Maul heads to a forgotten Sith fortress on the planet Damanos; it seems that this happened near the end of Darth Maul’s life, when he refused to work with the Crimson Dawn and instead took up an ancient Sith superweapon. The experience in Damanos is excruciating when Mol is confronted with images in the form of his greatest failures. However, the last test is different because he is facing Qui-Gon Jinn. Instead of fighting him, Qui-Gon uses Maul’s emotional vulnerability to urge him to turn away from the dark side. Other visions ended with Maul killing the creatures he encountered, but when he attacks Qui-Gon Jinn, the Jedi master disappears and takes the power of the dark side of the Sith castle with him. The pier is confused, but viewers will easily guess that this is actually the Ghost of Qui-Gon Jinn’s Power.

It’s a powerful scene, and it fits the character perfectly. Qui-Gon Jinn understood the Force more deeply than any other Jedi, and this made him believe in the possibility of redemption. He would have realized that Darth Maul was just another victim of Palpatine, a perverted ideology of the Sith, a tool that was used and then discarded when he fulfilled his purpose. Moreover, Qui-Gon wouldn’t have a grudge; he now had a broader perspective that transcended petty grudges.

The tragedy of Darth Maul, of course, is that he refused redemption. Darth Maul clung to his desire for revenge, continuing to look for ways to undermine Palpatine’s authority, until he focused on his nemesis Obi-Wan Kenobi. This led to the final confrontation between Darth Maul and Obi-Wan, in which the Jedi master easily won. There really is redemption in Star Wars, but in the end Darth Maul didn’t get it.