Home Entertainment Quarry: where to find all Tarot cards 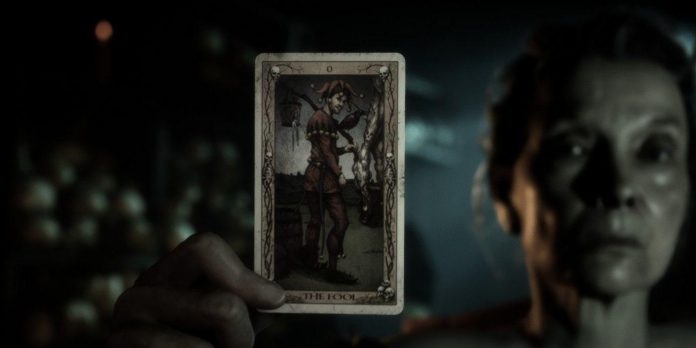 Tarot cards are Career collectibles that can help increase the chances of saving characters if they are found and used correctly. Each Tarot card can be collected and given to Eliza between chapters. Dealing Tarot cards will reveal a possible future that players can try to avoid or secure depending on what is shown. There are 22 Tarot cards that can be collected throughout the prologue and 10 chapters of the game.

Tarot cards will appear throughout the story and are indicated by a sharp shift of the camera. As soon as the Tarot card opens, players need to use the action button to collect it immediately, otherwise it may burn and disappear. Some Tarot cards have very small windows where players can collect them, and one is even part of the cut scene. Finding all 22 Tarot cards while playing The Quarry with friends or alone can be difficult, but it is recommended to search in places far from the main path.

After the Tarot card is collected, players can use it between chapters to view possible future events. However, there is one Tarot card, the Hierophant, which will not allow players to use other collectibles in the ninth chapter. Each Tarot card, except the Hierophant, can be dealt at the end of each chapter to potentially gain some insight into how to save the characters in the Career.

Fool (Prologue): While Laura is looking around in the forest, she will climb onto a small ledge, and the camera angle will change. The Tarot card can be seen as soon as the camera moves. Moderation (Chapter One): When Jacob enters the cabin, players can enter the kitchen by walking right after reaching the main room. In the kitchen, next to the pots, you can see a Tarot card. The Hanged Man (Chapter Two): In the second chapter, Abi and Nick from the Quarry will be looking for firewood. When prompted, players will need to choose a rocky road, and then the path on the left. The camera will move, showing the Tarot card that the players have to collect. The Tower (Chapter three): At the beginning of the third chapter, Abi will go into the forest alone and eventually begin to hear whispers. After the video, Abi can go forward until the perspective changes, after which the Tarot card will be on the trunk of the tree. The Star (Chapter Three): This Tarot card can be picked up as soon as Jacob goes to the canoe near the entrance to the boathouse. .The Wizard (Chapter Four): Playing for Emma, players can turn around and walk to the end of the pier. A cut scene is played before the finale. After its completion, Emma can continue to go to find another Tarot card that will help players get a better ending in their Careers. the lodge. The Power Tarot card needs to be collected quickly before the camera angle shifts. The Devil (Chapter Five): While exploring the camp houses, Dylan can collect the Devil’s Tarot Card near the picnic tables. Talking to Ryan will automatically advance the story, so you need to collect the Tarot card first. The Hermit (Chapter five): The hermit can be found by walking along the left side of the radio booth and going behind the building. Justice (Chapter Six): After Jacob passes over the wooden bridge, he can go down the stairs and immediately go left to find the Tarot card. Lunar Tarot card. This must be done before finding, comforting and trying to save Nick in his Career.

The World (Chapter seven): If Laura is standing in the far left corner of the camera for the first time when she can walk, then the Lunar Tarot card will be open to the players. The Chariot (Chapter seven): Once Laura can leave the chamber, players must pass between the tables to shift the angle of the chamber to open the Tarot Chariot card. Lovers (Chapter Eight): Lovers can be found after the fall of Ryan and Laura and the cut scene showing the railing. breaking ends in a career. Right in front there is a small part of the platform that extends to the left, and after walking along it, you will find the Lovers’ Tarot Card. The Good Luck Tarot card can be found on the left. The Empress (Chapter Eight): After reaching the Hackett Basement as Ryan, players can enter the room on the left and walk to the chairs to collect the Empress Tarot Card. The Emperor (Chapter Eight): From the entrance to the Hackett basement, Ryan can walk right past the room with the Empress and between the shelves with wooden barrels. The Emperor Tarot card will open near the end of the narrow path.

New Amsterdam: Season 5 reveals what all fans suspected of the...