Home Entertainment “Qatar, let’s go!” – Alisson, Fabinho and Nunes Are Going to The... 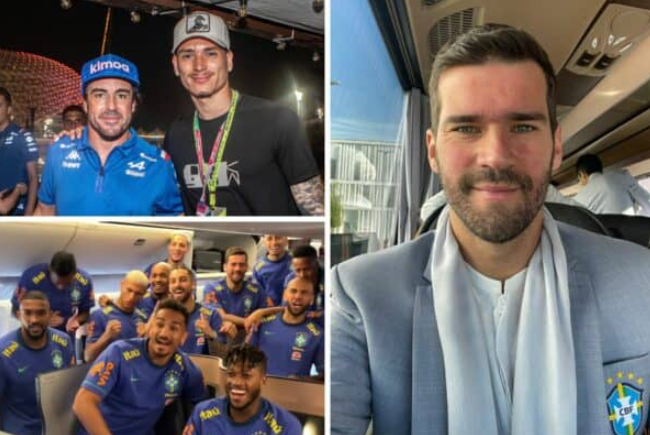 On the eve of the World Cup, Alisson, Fabinho and Darwin Nunez went to Qatar on Monday, and other representatives of Liverpool have already settled in their training bases.

The tournament starts on Sunday and Qatar will play Ecuador. The first participation of Liverpool players will take place on Monday: Trent Alexander-Arnold and Jordan Henderson will play for England against Iran, and Virgil van Dijk will captain the Netherlands against Senegal.

All three of these players, as well as Frenchman Ibrahima Konate, arrived in Qatar with their countries earlier this week and have spent the last few days adjusting to the new conditions.

Brazil and Uruguay will not begin their group stage campaigns until Thursday, and both will begin preparations for the tournament in other countries this week.

Tite’s team was based at Juventus’ training camp in Turin, while Darwin Nunez and his Uruguay teammates were in Dubai. However, both teams went to Qatar on Saturday.

Alisson and Fabinho shared photos on social networks while the Brazilian national team was preparing for the start.

Nunes, meanwhile, landed in Qatar earlier in the day, tweeting the words “Uruguay is home.”

Before going there, the Uruguayan national team met with the stars of Formula 1 in Dubai on Friday, where Nunez was pictured with Fernando Alonso.

Meanwhile, in Qatar, Konate is enjoying his pre-tournament photo shoot, and reports say he could start France’s first match against Australia on Tuesday.

Van Dijk has taken part in his media duties in recent days, preparing to lead the Netherlands in its first ever World Cup.

Alexander-Arnold and Henderson were smiling at England training on Saturday and there was no indication at this stage whether either of them could make the starting line-up against Iran.

Roberto Firmino, Thiago and several Liverpool players who are not participating in the tournament have been photographed on vacation in the middle of the season in recent days.

Let’s hope that those in Qatar will pass the tournament unscathed.

Fallout 76: Trailer Released Showing It Will Also Include Pittsburgh In...