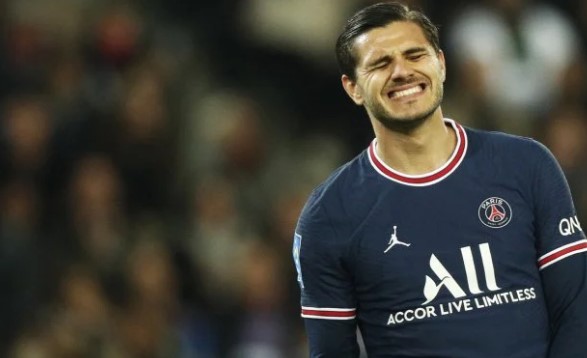 Having got into trouble at PSG, Mauro Icardi may return to Galatasaray. One thing is for sure, different parties are negotiating, and Luis Campos personally took matters into his own hands.

8 days before the end of the transfer window, PSG’s loft is still full, even if Ander Herrera is preparing to terminate his contract and move to Athletic Bilbao. Livin Kurzawa, Rafinha, Julian Draxler, Idrissa Guye and Mauro Icardi are still on the sidelines. So obviously none of them wants to make a gift to Paris in order to leave the very cozy cozy nest of the capital club.

But the Argentine striker, whom Christophe Galtier clearly ousted at a press conference a few days ago, was clearly followed by a club. The door has been open for several days and leads to the Galatasaray side. Wanda Nara has been in contact with the Turkish club’s management for some time, but things have been moving forward for several hours.

Negotiations have begun between Mauro Icardi and Galatasaray…

According to our information, negotiations are underway between Mauro Icardi’s entourage and the Istanbul club. We are talking here about paying off a loan with a purchase option. The Galatasaray option would thus allow the former Inter Milan striker to regain the pitch and, perhaps, some confidence in front of goal, the one who also scored the first goal in his Parisian career in Turkey on the Galatasaray pitch.

The file is under the direct control of Luis Campos and his henchmen, who have many records in the Turkish club and until May last year collaborated with the management of Galatasaray. It remains to determine the contours of wage support and the purchase option that will be included in the loan offer.