A leaker has just revealed the image of the PS5 menu. This information is causing a buzz, but it will surely not please the Sony company.

Tic Tac, the arrival of the PlayStation 5 is imminent! Impatience is therefore felt among fans of video games. A few months before its release, the PS5 is revealed more and more . A photo of the menu of the future console has just been published on the net!

Sony’s direct competitors have already highlighted their next machine. Yes, the public was finally able to discover the Xbox Series X. Today, gaming fans are therefore impatiently waiting for the Japanese company to also take a step forward. The PS5 could reveal itself to the world as early as next February. But today, the news is still very vague compared to the future console. The only certain things about the Play Station are therefore limited. Indeed, it should offer Ray Tracing, have a new controller and a 4K Blu-Ray player.

But that’s not all ! The designers have assured that the loading times of the PS5 will be reduced considerably! Good news for fans who should love the future game console! The secret of the product remains well kept but the whole world is still trying to learn a little more. Last December, a Twittos then revealed the dev kit for the new PlayStation. Thanks to him, internet users were able to contemplate the new Sony war machine!

A PS5 MENU IMAGE IS BUZZING ON THE WEB! 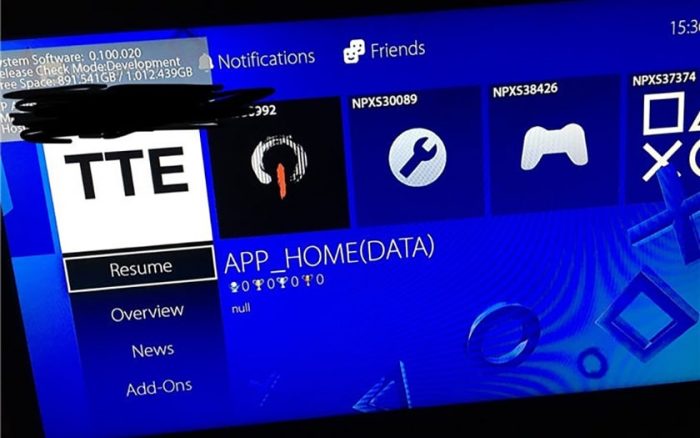 Following this revelation, a journalist had therefore explained the strange shape of the PS5 . According to him, “the reason why it is imposing and V-shaped is that it allows developers to stack them easily when they carry out multiple tests. The cooling system is optimized to expel air flowing to the sides and the center. ” Today is a menu of the photo that made the buzz on the net. But beware, the snapshot broadcast may not be true.

See Also
PlayStation 5: Sony presents games and design of its next console

This is the opening page for the new console. At first glance, it seems to correspond quite well to the usual design of the Play. Blue image and similar logos, everything looks like the menu of the 4. However, there are still some differences. Like the Decima Engine icon for example. Also, the smart guy who revealed the image of the PS5 menu has thought of hiding his identity. Sony may therefore not appreciate…