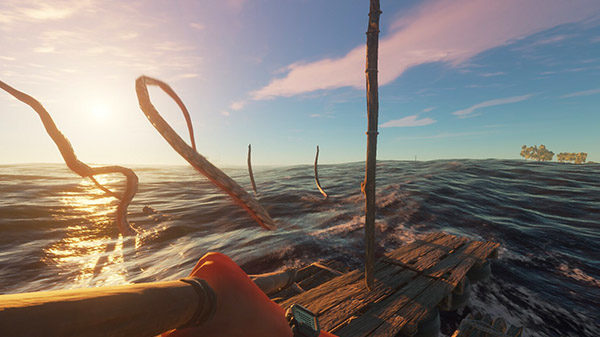 The series, which has been spoken all over the world for a period, lost its success to its interesting story about survival. Although he made an unpopular finale and became the Game of Thrones of his time, the concept of a semi-fantastic tropical island attracted great attention.

Of course, in survival games, one of the popular game types of recent years, our course would have fallen on a tropical island. Stranded Deep begins by paddling on a palm tree island that comes to mind when we all call the desert island, and the island becomes our home until it gets rid of it.

‘It is not enough to survive, it is necessary to get rid of it’
Beam Team Games, founded by Sam Edwards and Ben Massey, posted their first game-related announcements for PlayStation on the console’s internet blog. In the statement, “We have been working on this game for more than 5 years, we love games even though some people from Brisbane have worked in other sectors before. It was fun and we wanted to do something that people would want to play. ”

The game has a tropical island and almost everything we expect it to be. Sharks, octopuses and various sea creatures take part in the game. Land is also not safer than the sea; there are other creatures like snakes and wild boars.

Survival games usually have no end, every day is a new challenge, and we try to find new ways to survive every day. In this game, we can get rid of the island and win the game in a real sense.

2-year Telltale delay:
Actually Stranded Deep game was announced in 2018. Telltale, who would later become the distributor of the game, announced the bankruptcy. The future of the game was also the subject of discussion after this event, which was suddenly agenda in the game world.

Beam Team Games team decided to release the game under their own brand. Thus, PlayStation 4 users had a new game where they could struggle to survive in the oceans. You can watch the promotional video of the game that will be released tomorrow.

PS5 versions of the games were created from scratch

A Software Developer Made Windows 95’s Interface A Theme For Windows...

Press Images of Redmi K30i Expected to Be the Cheapest 5G...