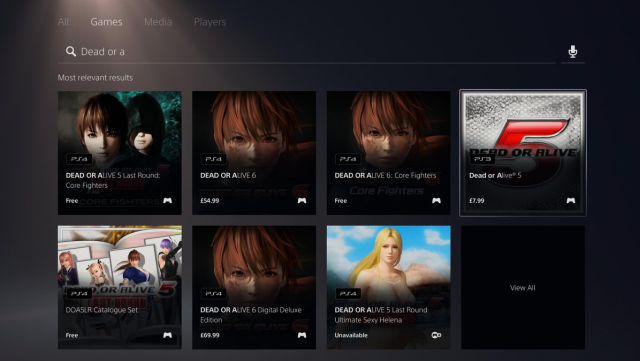 PS3: Some users have found classic titles like Dead or Alive 5, Prince of Persia: The Forgotten Sands or Bejeweled 3 in the PS5 store. Some users have found different PS3 games by browsing the PlayStation Store (UK) from their PS5. The fact that they exist should not be something striking, but it is that they appear with an assigned price. The user Jordan Middler, who is part of the VGC medium, has shared an image in which we can see Dead or Alive 5 at a price of 7.99 pounds and immediately afterwards, another one has replied showing two installments of Prince of Persia that they are in the same situation —in the American store—, assuring that they were detected last October.

Just a few minutes later, another user (GameRiot) has done the same, showing an image from the console in which we can see Bejeweled 3 in its PS3 version at a price of 5.99 pounds. It is worth mentioning that some people have tried to acquire them and have not been able to complete the process. Therefore, it is currently not possible to determine if this is an indication of a hypothetical move by Sony, or an error.

“Spartacus”, the next Sony service?

A little over a month ago, Bloomberg assured that the Japanese plan to launch a new service this year. The code name is “Spartacus”, and according to the medium in question, it would offer the following subscription options:

First category: all the benefits that PS Plus offers (online game, selection of monthly titles)
Second category: all of the above plus a catalog of PS4 games and, over time, also PS5.
Third category: the above plus an extended catalog of demos, game streaming and a library of classic PlayStation, PS2, PS3 and PSP games.
The last category is the one that has set off all the alarms among users who have found PS3 titles accessible from the PS5 store. In any case, Sony has not commented on this or on Bloomberg’s claims. Of course, the company has just withdrawn PlayStation Now subscription cards worldwide.