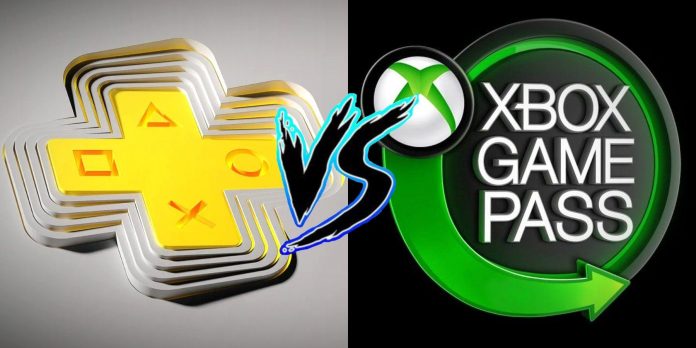 Since Microsoft launched its Xbox Game Pass subscription service back in 2017, there have been persistent calls for Sony to follow suit with its own rival. After years of questions and speculation the Japanese platform holder has finally delivered on that front. The rebooted PlayStation Plus rolled out across the globe in June, and has already found solid success. Between day one debutantes like Stray and Deliver Us the Moon, and upcoming additions like the Yakuza series, the service has already demonstrated its value.

Considering how Microsoft’s subscription service inspired and prompted Sony to step up its own game though, comparisons between the two are more than natural. Ever since the rebooted service was leaked several months ago, fans have been weighing up how both publishers have managed to approach the same Netflix-esque concept in unique ways. Now that the new-look PS Plus has launched, it’s worth taking a look at how its feature-complete Premium tier compares with Xbox Game Pass.

RELATED: 5 Games That Would Be Amazing to See on PS Plus Premium

Arguably the most important comparison that needs to be made between PS Plus Premium and Xbox Game Pass right off the bat, is the type of content that they offer. In a world dominated by an ever-growing list of subscription services, the phrase ‘content is king’ has become all the more relevant. It’s perhaps unsurprising that Microsoft and Sony have gone down similar yet unique avenues on this front, in an attempt to demonstrate their respective value.

What’s obvious about PS Plus Premium and Xbox Game Pass from only a passing glance, is how Sony and Microsoft have both adopted a similar approach to their biggest selling point. On a basic level, subscribers who buy into either service are immediately given access to a library of games. Each month new titles are added into the mix as well, while others cycle out incrementally as contracts with third-party publishers and developers expire. Players are free to access any game that’s currently on the service, but lose access permanently whenever one is removed.

What helps to make PS Plus Premium’s library more enticing, though, is the fact that its list includes all the Extra tier’s content as well. That means in total players have access to roughly 700 games from across PlayStation’s storied history. In addition to modern hits like Returnal, classic games such as Ape Escape and Syphon Filter are locked exclusively behind Sony’s most expensive tier. It’s easy to imagine this being one area that Sony continues to improve on, based on how long it’s been making console games in comparison to its rival.

In comparison, Xbox Game Pass’ library is slightly smaller. While the list of titles changes each month, on average the selection clocks in at roughly 400 games. It’s worth keeping in mind though that there’s one significant caveat to this, that numbers alone don’t demonstrate. Even though Sony has been reluctant to go down the same road, Microsoft has reconfirmed that all of its first party content will continue to launch day-and-date on Game Pass. From a content perspective, there’s no denying how valuable this is.

RELATED: New PS Plus Extra Game is an Easy Platinum

As has been discussed, PlayStation Plus Premium includes all the benefits that players can find in the subscription service’s lower tiers. In addition to PS Plus Extra’s catalog, that also means players get access to its traditional monthly titles via the Essential tier. It’s worth keeping in mind that Microsoft offers a similar bonus for Xbox Game Pass Ultimate subscribers as well. Even though there have been calls for the service to be modernized, anyone with an Ultimate subscription can access Games with Gold’s own monthly rotating content.

When it comes to bonus content like this, Microsoft and Sony have diverted down similar lines in other areas as well. One of the bonus benefits that helped to get Xbox Game Pass up and running initially, was the deal its publisher struck with EA. If a subscriber buys into its Ultimate incarnation, they immediately get access to EA Play as a result. In an attempt to level the playing field slightly, Sony has struck a similar deal with Ubisoft. Throughout 2022, 50 of the publisher’s modern hits will subsequently land on PS Plus via Ubisoft+.

Despite offering comparable content, there’s a noticeable difference between PS Plus Premium and Xbox Game Pass when it comes to their respective entry fees. Reflecting its moniker, Sony currently charges subscribers $17.99 each month for PS Plus Premium. Alternatively, they can also buy a quarterly 3-month subscription for $49.99, or a yearly one at $199.99. Even though PS Plus Premium is only feature-complete on PS4 and PS5, its worth pointing out that PC owners can download an app for the service that allows them to stream games.

No matter which version of Microsoft’s Game Pass subscribers opt into, they end up paying significantly less than PS Plus Premium players. The traditional option for example, which is available on Xbox and PC, costs only $9.99 per month. Game Pass Ultimate, which grants access to both versions of the service’s library, has a slightly higher $14.99 monthly entry fee. Annually, that means players can expect to pay either $119.88 or $179.88, depending on which version of Game Pass they opt for.

While personal preference and taste is obviously subjective, there’s no denying that Microsoft currently offers a more cost-effective deal. That also extends to the trial versions of each respective subscription model. Typically, Xbox and PC players can get a one-month trial of Game Pass for only $1. In comparison, Sony offers a free trial of PS Plus Premium that lasts for just one week.

While the games on offer will always be what drives subscriber adoption, both Sony and Microsoft have added extra features into the mix in an attempt to entice players in. On PlayStation Plus Premium, subscribers have the ability to test out several games such as Horizon Forbidden West, thanks to Sony’s trial initiative. Beyond being able to upload their save files to the cloud, Premium tier players also have the ability to stream their games instead of downloading them. The feature that was once the hallmark of PS Now is currently the only way that subscribers can access the service’s PS3 catalog.

When it comes to Xbox Game Pass’ extra features, Microsoft has spread them out between its two tiers. The ability to stream the subscription service’s biggest games directly to mobile devices and select TVs, via Xbox Cloud Gaming, is arguably Ultimate’s standout feature. Players also have the ability to earn bonuses via Microsoft’s Reward scheme as well, regardless of which subscription model they choose to buy into.

Going forward, it appears as though there will be convergence between the two platforms when it comes to these extra features. Microsoft has recently announced that it plans to roll out its own game trial and demo scheme to Game Pass in the coming months. Similarly, Sony has announced that it’s also building its own rewards initiative called PlayStation Stars. While the specific details are currently scarce, it’s been revealed that PS Plus subscribers who enroll in the scheme will be able to earn PlayStation Store discounts.