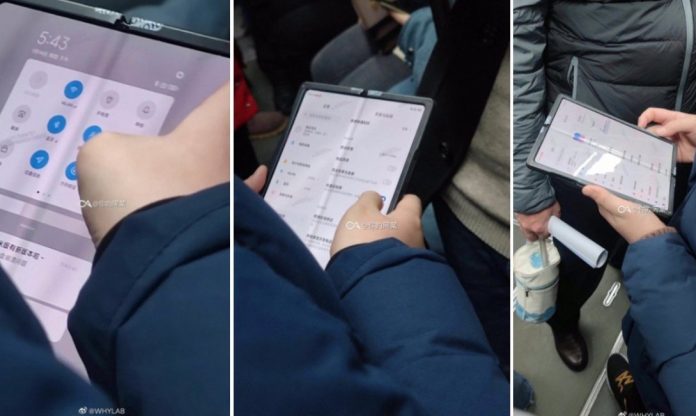 In China, a foldable smartphone was seen in the hands of a passenger traveling on a subway, which is not clear from which brand it belongs, but works with the MIU 12 interface. After the photos, this phone is thought to be Xiaomi’s new foldable smartphone prototype.

Giant phone manufacturers such as Samsung, Huawei and Motorola were among the names that have already added foldable smartphone models to their product range. Chinese technology giant Xiaomi also stated that he was preparing for this race, but there was no sound from the new model.

A passenger noticed a foldable phone with an unknown brand but MIU 12 interface on a subway in China. These photographs he took may be the first look at Xiaomi’s smart foldable phone model.

Foldable phone may not have a front camera

All the details on the screen of the smartphone in the photos are in Chinese, but some sources translate these details and say that the storage space of the device is shown as 256 GB. The device is probably wrapped in a case so that it is not clear which brand it belongs to, so it is not clear whether the phone has a front camera.

The resulting photos also show that the foldable smartphone’s power and volume up and down buttons are positioned on the left side of the device. Xiaomi has not made an official statement about its foldable phones, but experts claim that this device, whose prototype is displayed, will be released in 2021.

Kirkman wanted to kill Rick to make way for Carl!