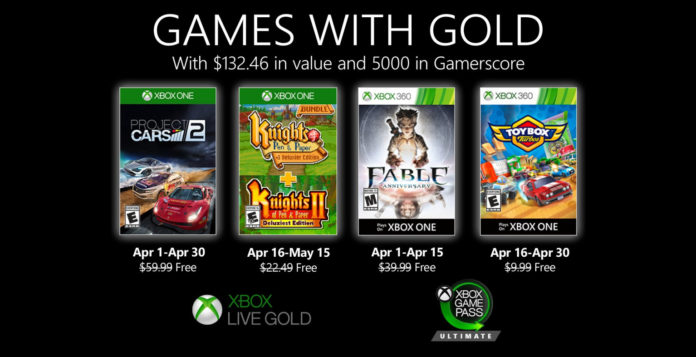 Microsoft has revealed that Project Cars 2, Fable Anniversary, Toybox Turbos and the Brazilian RPG bundle Knights of Pen and Paper are the free games from Games With Gold in April, for Xbox One and also Xbox 360. This is a special, exclusive program of Xbox Live Gold subscribers, which grants download games at no extra cost. While the subscription is active, they can be downloaded as many times as the user deems necessary. The news, announced on Tuesday (31), will arrive on Wednesday (1), and will be available throughout the month, on different dates.

The main game is Project Cars 2, a realistic high-speed simulator. The game has the most varied cars and models of famous brands, on tracks that also exist in real life. The graphics are one of the highlights of the adventure, which is free between April 1 and 30, compatible only with Xbox One.

Knights of Pen and Paper Bundle is a special package that features the two games in the series – the first of which was created exclusively by the Brazilian group Behold Studios. This is a game that mimics a table RPG session, with books and dice. It is necessary to create a group of heroes and carry out missions while creating your own story. Availability will be between April 16 and May 15, only on Xbox One.

Fable Anniversary, on the other hand, is a special re-launch of the first game in the famous Microsoft series, featuring an unprecedented action RPG adventure – this will be available between April 1st and 15th. Finally, there is the Toybox Turbos, also a racing game, but which mimics toy cars, for free between April 16 and 30. These last two are compatible with Xbox One and also Xbox 360.

See Also  Did Xbox Live crash? How about Xbox One games?