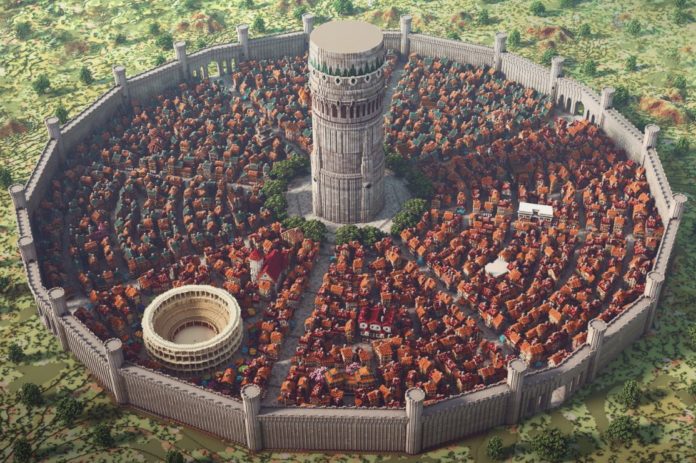 Varuna, one of the teams that plays on a private server in Minecraft and is paid real money to build something, added a new one to their successful work: A huge city.

In Minecraft, some players play on private servers, and these players are paid to build something, enrich the game. One of the teams with such players is Varuna.

The team, which has made remarkable designs before, presented its latest works to the players’ skills. This magnificent city was built in quite a long time. Probably anyone who built the city paid the team a serious sum.

From anime series to Minecraft
The city built by the Varuna team is quite large and the central tower reaches the highest permissible point in the game. When we look from a distance, this city resembling Imperial City in Oblivion and Isengard in The Lord of the Rings is actually an anime / manga series, Is It Wrong to Try to Pick Up Girls in a Dungeon? A copy of the Orario Maze City in the book named.

All the buildings in the city have their own interior design and there is a dungeon tower in the center. To build all this, it was announced that the team had to work 12 hours a day for more than 2 months. Naturally, the payment was accordingly.

It means that this structure was built on the private server, and it also means that Minecraft players will not be able to download this structure even if they want it. So we can only use the screenshots on the team’s site to see the details of this wonderful city, we cannot navigate the city.

Not the first work of Varuna
Varuna team also includes the previous work they have done on the site. Among these works are works such as centers of super villains, GTA cities, historical buildings. Also, different map types are included in the game.

Many other groups of players also produce magnificent pieces in the Minecraft game. Are you playing Minecraft? At what level are your works? We are waiting your comments.