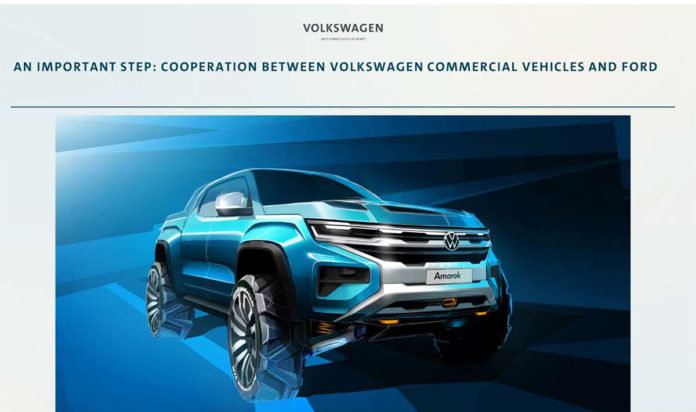 2022 Volkswagen Amarok, the product of Volkswagen-Ford cooperation, was shown for the first time. Volkswagen shared the visual of the second generation pick-up vehicle during the Annual Media Conference.

He exhibited the model named Volkswagen’s Nivus during the Annual Media Conference. The automotive giant also shared the image of the second generation Amarok during the conference. Volkswagen CEO Herbert Diess said Amarok will be one of the first fruits of the collaboration between Volkswagen Commercial Vehicles and Ford.

Volkswagen and Ford announced global cooperation plans for commercial vehicles and pick-ups in January 2019. These developments show that the new generation Amarok will have a lot in common with the new Ford Ranger. New vehicles will be available in 2022, the two brands announced last year.

It seems that the new Amarok will continue to look imposing, preserving the design of the older generation in general terms. Automakers tend to exaggerate many details when they share such designs, and that may be the case with the new Amarok.

The illustration shows that the 2022 Amarok will arrive with a bulging bonnet, huge off-road wheels and wide off-road tires, and will not have door handles. These features may appear in a different way in the mass production model. However, in general, we can say that the design line will go in this direction. With the agreement between Volkswagen and Ford, vehicles such as the new Ford Transit Connect and Volkswagen Caddy are expected to be co-produced.

Differences Between The Motorola Edge 20 Lite, Edge 20 and Edge...

The Processor Of The Google Pixel 6 Could Turn Them Into...