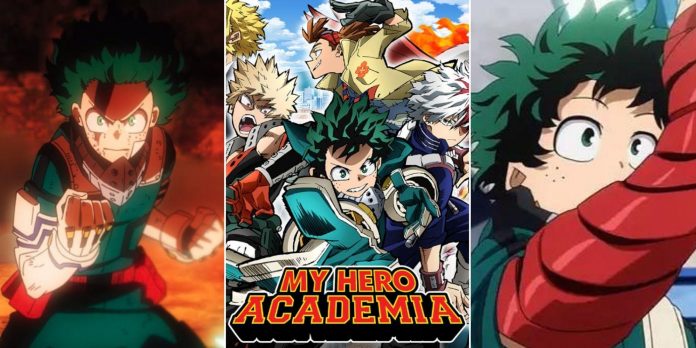 My Hero Academia has so far released 3 feature films to great success. However, these movies don’t adapt any of the source material, and thus enter a controversial space for any anime adaptation.

When anime adaptations of successful manga become popular enough, they often receive high-budget movies to capitalize on their success. Whereas series like Demon Slayer opt to use their movies to adapt more story material, however, others like My Hero Academia go the controversial route of creating completely original stories for their movies, which can create a host of issues.

RELATED: Would My Hero Academia Be More Interesting If Deku Stayed Quirkless?

Messing With The Story Progression

While a lot of people have issues with the way MHA’s story has been progressing recently, complaints only really started to crop up after the ‘liberation war’ arc, which is yet to be animated. All 3 movies so far take place before this point, yet are inconsistent with what was happening in the anime at the time of their airing.

On a micro level, the 2nd movie, Heroes Rising, takes place after season 5’s ‘joint training’ arc, so features power upgrades and character development that were first unveiled within that arc. In the anime, Fumikage Tokoyami’s battle against Class B provides a perfect opportunity to reveal his new move, ‘dark fallen angel’, which allows him to fly. Its reveal has all the pomp and circumstance a shonen powerup deserves.

In Heroes Rising, however, he is simply shown flying with no special mention. For any manga readers or viewers who had already seen the anime, this comes off as natural. However, a lot of viewers will have seen Heroes Rising first, kneecapping the reveal for them.

On a bigger level, Heroes Rising also features the villain, Nine, whose existence spoils a big twist in the upcoming war arc. In the manga, the reveal that Shigaraki was secretly being pumped full of more quirks was a shocking and terrifying reveal, especially off the back of his actions in the ‘my villain academia’ arc. Nine however, has already gone through this procedure, revealing this detail to fans years before the war arc’s anime adaptation in season 6.

Speaking of Nine, he and the other movie villains all fail to be as compelling as even the weakest MHA villains. This is understandable, as they only receive under 2 hours to establish themselves, whereas the villains in the main story can spread themselves out across entire story arcs.

In the first movie, the main villain, Wolfram is completely forgettable as an antagonist, and has very shallow motivations. Nine is an improvement, as he is shown to be acting to find a quirk that can counter the debilitating effect of his own quirk. However, beyond this, he doesn’t have much more character to latch on to. And finally, the third movie’s Flect Turn does give some focus to the quirk singularity subplot, but ends up being just as one-note as the previous two villains.

A consistent issue with them is their lack of buildup. Their small amount of screentime and one note personalities means they end up being nothing but big spectacles for the heroes to blast flashy moves on. Comparing them to even a villain as short-lived as Gentle Criminal is like night and day. Gentle had very little time to shine, yet had a sympathetic motivation that made many fans root for him, as he was once a hero hopeful himself.

These issues come back to the difference in time that the movie villains had to establish themselves, but it begs the question if original villains are even worth it if they aren’t going to be able to live up to even the weakest villains in the main story.

Even excusing these other issues, the fact still remains that the movies are anime original content, and therefore don’t actually affect the main MHA story. The value of non-canon anime movies is already a regular debate amongst anime fans. Some people feel like anything that doesn’t directly impact the story is worthless filler, while others argue that it’s worth it to see the characters in more fresh and less restricted scenarios. And, the budget afforded to movies does make for some of the most fluid and bombastic animation a series can hope for.

In MHA’s case, the movies do dance on the edge of canonicity. The arm support first seen in MHA:Two Heroes later comes back in the manga. The story states the item was imported from America, where Melissa Shield is based, implying she is canon to the main story and still offering the heroes support items. Star and Stripe is also revealed to have been one of the children All Might saved in America at the start of Two Heroes. There is also speculation that the end of Heroes Rising might become relevant after a recent manga chapter.

With the aforementioned ways that these movies muddle MHA’s story structure, however, it’s questionable if any small plot details they add justify their existence. Someone could consume MHA in its entirety without ever seeing the 3 movies and miss nothing vital. Avoiding the movies might actually improve their viewing experience by removing extra fluff.

Should There Be More?

Ultimately, the MHA movies make money, so they probably won’t stop making them anytime soon. There are even reports that the series is aiming for 10 movies in total, meaning an extra 7 on top of what has already been released. It’s unlikely new movies will stray from the decision to use original stories, but as the series nears its conclusion in the manga, it’s hard to see where in the timeline these new films could go.

There is one arc which sees protagonist Izuku Midoriya acting on his own for some time, so a movie might be able to cleanly fit a new story during that time period. Past that point however, with the ending approaching, there is little space to plug new stories. Meaning any movies that try to shove themselves into the timeline might end up making themselves seem even more pointless.