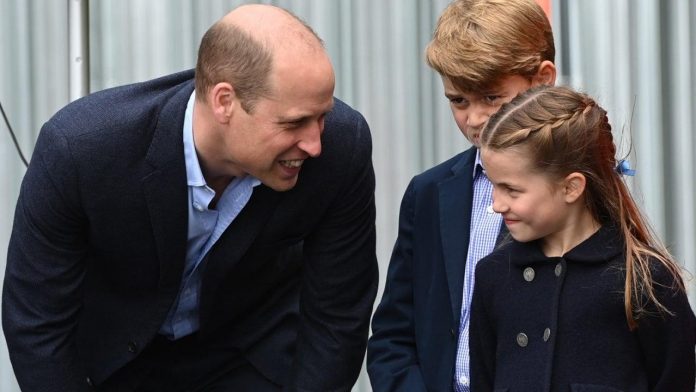 Princess Charlotte was the center of attention. On Sunday, the daughter of Prince William and Kate Middleton joined her father in a new video posted on the Duke and Duchess of Cambridge’s official social media accounts.

“Good luck today @lionesses, we are all rooting for you,” a post dedicated to the Lionesses women’s soccer team was signed.

In the video, Charlotte sits on William’s lap while he says the first half of the message. “We both want to wish the Lionesses good luck tonight, you performed amazingly well at the competition, and we are rooting for you all the time.”

“Good luck. I hope you win, bye,” says a 7—year-old girl, smiling and waving at the camera before the end of the video.

Charlotte is the spitting image of her father, as her long brown hair falls over a blue polka dot dress. This is the first time a young royal has appeared on her parent’s social media page. Kate and the couple’s other children, 9-year-old Prince George and 4-year-old Prince Louis, were not in the video.

The message was received as the official account dedicated to the Lionesses responded in the comments. “Thank you very much! 😊,” the team wrote.

The message was published before William’s appearance at the women’s Euro 2022. The Duke, who is the president of the football association, is not the only high-ranking person who shows love for the team. Ed Sheeran and Sam Smith both turned to their social media accounts to support the athletes.

William and Kate, who got married in 2011, give the world a look at their growing children. Last week, the couple shared an official portrait taken by the Duchess in honor of George’s 9th birthday.

Charlotte’s moment on social media also came after her older brother George went out with his parents to another major sporting event. Earlier this month, a young member of the royal family made his Wimbledon debut with his mother and father.

George, elegantly dressed in a blue suit, sat in the royal box with William and Kate and enjoyed the men’s final match with defending champion Novak Djokovic and Nick Kyrgios.