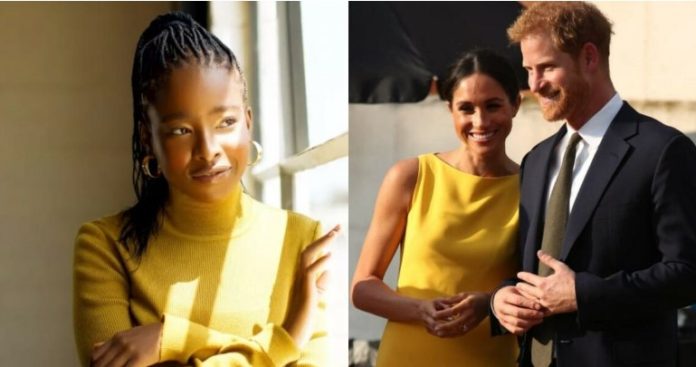 After separating from the royal family, Prince Harry and Meghan Markle took up areas of their own interest and free will. Their most recent and long-awaited endeavors were The Markle Archetypes and Prince Harry’s upcoming memoirs. However, before its release, Megan’s podcast sessions made a lot of noise. Recently, studying the topics of freedom and self-realization, her podcast was visited by several significant personalities.

Amanda Gorman also accompanied the Duchess along with Michaela Jay Rodriguez and Candace Bushnell in “Archetypes.” However, the Sussexs seem to have gotten close to Gorman, at least as the latter’s Instagram post suggests. After talking about some hot topics, such as the stigmas associated with women and their sexuality, the post showed the duo posing for a hilariously bright photo.

On the occasion of Thanksgiving and after spending some time with the Duchess over the archetypes, Gorman took to Instagram to thank the couple. She took the moment to write: “Insanely glad that I had the honor to talk to the Duchess.” The trio embraced tenderly, and their faces were full of happiness and gratitude. Amanda S.K. Gorman is an American poet and activist working on issues of oppression of women by a chauvinistic society. Her focus is on race and marginalization, as well as the African diaspora.

Before that, Harry and Meghan appeared in the segment to congratulate their longtime friend Elton John on his retirement. They showered him with gratitude and appreciation for having served the world with his cathartic music for ten years. He also mentioned how all three generations of the royal family were glad to see him among their close allies. Since the couple couldn’t thank him enough for his music, fans couldn’t get enough of the affection and love they radiated.

The couple, who announced their renunciation of the family, still lives in their Montecito home in California. The Duke and Duchess of Sussex are raising Archie and Lilibet’s children in the latter’s homeland. They are currently working on their various upcoming projects, which have already caused a huge stir.

How did you like the attitude of Prince Harry and Meghan to their close acquaintances?