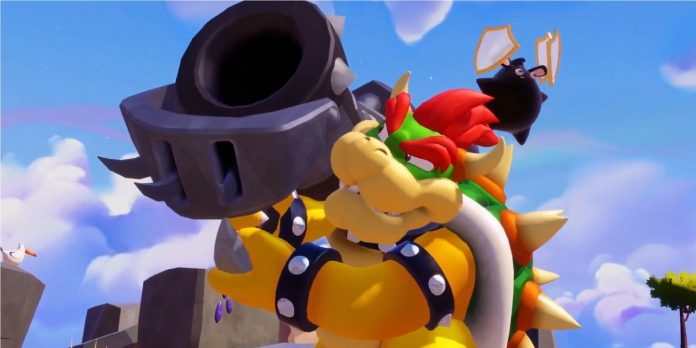 Mario + Rabbids: Sparks of Hope takes place in a galaxy that contains both the Super Mario Bros. and Raving Rabbids characters. The galaxy comes under threat by a mysterious being known as Cursa, who wishes to drain all of the energy from the universe. Cursa’s power manifests in energy called Darkmess, which she uses to reinforce her troops and strengthen her control over individual worlds. The armies of Cursa have been sent out across the galaxy to find the Sparks: creatures that are a fusion of Luma and Rabbids. Mario and his friends depart into outer space to try and save the Sparks, as they must travel to each world and defeat the forces of Cursa that stand in their way.

As Mario + Rabbids: Sparks of Hope is an adventure across the universe, the individual stages are spread across different worlds, where players can complete quests and uncover mysteries in the environment. These worlds include a lush beach, a planet with broken castle ruins, a volcano battle arena, and a large snow-covered fortress. The planets will start out covered in Cursa’s Darkmess, but as her forces are defeated and her influence wanes, the Darkmess will fade away. As the Darkmess subsides, the planet will open up more, and the player will be able to take on more quests for the colorful inhabitants.

It was revealed during the Nintendo Direct Mini that Bowser will be joining the party as a playable character. Bowser fights with a bazooka, which can be used to destroy enemy cover. Bowser isn’t the only new playable character in Mario + Rabbids: Sparks of Hope, as he’s joined by Edge, who is the Rabbid from the original trailer that looks like a recolored Cloud Strife. Edge is actually a female Rabbid, who acts as a powerful sword-wielder, with the ability to carve up foes from melee range, and send long-range slashes across the battlefield. One of the other new Rabbid characters is the unenthused Rabbid Rosalina, who fights with a cannon hidden in a Sparks doll, which fires ammunition that looks like the Star Bits from Super Mario Galaxy.

One of the biggest changes in Mario + Rabbids: Sparks of Hope is the gameplay, as characters can now freely move around in a limited area during their turn in real time, rather than limited turn-based movement. There are also items that let the characters bypass hazards, such as Edge using a helicopter version of Beep-O to fly around and get behind enemies. It’s possible for a character to dash into their enemies while moving, which can result in special effects, such as activating Bob-Ombs, allowing them to be thrown as an explosive. One aspect from the original Mario + Rabbids: Kingdom Battle that is still important is cover, as ending a turn with a character out on the field will leave them wide-open to enemy counters. This freedom of movement gives the player a lot more control over their squad in battle, making it a lot harder to make mistakes or be left in an unfortunate position.

All of the characters in Mario + Rabbids: Sparks of Hope have new weapons including Mario sporting a pair of dual lasers, which can be used to strike two foes at the same time, and Princess Peach’s Bombrella acting like a shotgun. The characters also have unique special abilities that can be used, such as Princess Peach using a spell that increases the defense all of nearby allies, and Rabbid Mario entering a counterattack state, and Rabbid Rosalina putting all nearby enemies to sleep. The Sparks can also contribute to Mario’s team, acting like equippable special abilities, with effects that are tied to their respective element. The player can also equip a second Spark to each hero, which further enhances their abilities or lets them perform new actions in combat.

There have been a lot of shake-ups in the combat system in Mario + Rabbids: Sparks of Hope, with the player given more freedom to maneuver their characters during their turn, and the different Sparks allowing for characters to excel in areas outside of their specific archetype. The fact that the game has left the Mushroom Kingdom and gone into outer space means that there is also limitless scope for level types and exploration. Mario + Rabbids: Sparks of Hope looks to improve upon the formula laid down by Mario + Rabbids: Kingdom Battle and its DLC, with a more engaging combat system, and a universe that goes beyond the joke of “What if Rabbids entered Mario’s universe?”, and tells a genuinely epic tale of its own.