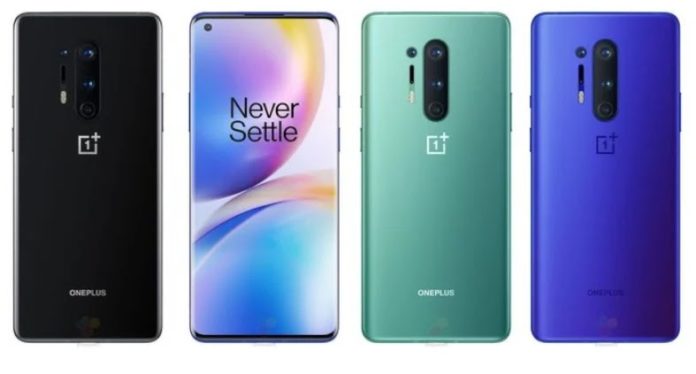 Leaked press images of the OnePlus 8 Pro show that the device will come in Onyx Black, Glacial Green and Ultramine Blue color options. In addition to the same black and green color options, OnePlus 8 will be available in Interstellar Glow hue, which is similar to the color scheme of the Instagram app, rather than Ultramine Blue.

Official renderings of OnePlus 8 Pro:
Images show that the OnePlus 8 Pro has a curved screen with a camera hole in the upper left corner of the screen. There are three vertically positioned cameras on the back of the smartphone. The ToF sensor is located above the dual LED flash, apart from the cameras.

Technical specifications of OnePlus 8 Pro
OnePlus 8 Pro will have Snapdragon 865 processor, LPDDR5 RAM and UFS 3.0 storage. The phone is expected to come with 30W Warp Charge wired, 30W wireless and 3W reverse charging support. It is also said that the phone will have 4,510 mAh battery. On the other hand, the OnePlus 8 Pro is expected to be available with 8 GB / 12 GB RAM and 128 GB / 256 GB storage options.

Additionally, the OnePlus 8 Pro will have a 6.78-inch S-AMOLED display. There will be a 16 megapixel selfie camera on the screen. On the back, there will be the Sony 48 MP IMX689 main camera, 48 MP 120 degree Sony IMX586 ultra wide angle lens, 8 megapixel telephoto sensor with 3x optical zoom and 5 megapixel depth sensor.

Interest in Ethereum will decrease according to the whale

What is the reason for Bitcoin’s Red Alert?