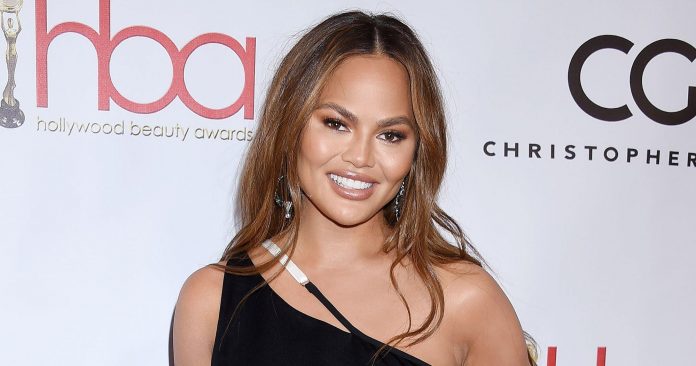 Brushing it off. Chrissy Teigen fired back after social media users criticized her appearance — and she didn’t mince words.

The Cravings cookbook author, 36, shared a sweet photo with son Miles, 4, via Instagram on Sunday, August 7, after a boat outing. “Keeping up with this one somehow,” she captioned the pic as the toddler squirmed on her lap.

While many of Teigen’s famous pals — including Jen Atkin and Yashar Ali — gushed over the cute family moment, one follower wasn’t so positive. “Don’t even recognize her,” a troll commented, to which Teigen replied, “I have had these teeth for like 10 years.”

Chrissy Teigen at the Hollywood Beauty Awards in Los Angeles on March 19, 2022. AFF-USA/Shutterstock

Another user, however, came to the model’s defense. “She literally looks the same. Wtf is wrong with everyone’s eyes in these comments. She has just has her makeup done. Obviously,” the fan wrote. Teigen responded to their thoughtful remark, adding, “What’s funny is I usually do full glam or nothing at all and this time I took 10 mins to do it myself and I never am again lol.”

In another comment, Teigen summed up her feelings with a simple statement: “u guys are something.”

Along with Miles, the Utah native shares daughter Luna, 6, with husband John Legend. Earlier this month, Teigen announced she’s pregnant with the couple’s rainbow baby following the loss of son Jack in 2020.

“The last few years have been a blur of emotions to say the least, but joy has filled our home and hearts again. 1 billion shots later (in the leg lately, as u can see!) we have another on the way,” the expectant star wrote via Instagram, posing with her bare baby bump on display. “Every appointment I’ve said to myself, ‘ok if it’s healthy today I’ll announce’ but then I breathe a sigh of relief to hear a heartbeat and decide I’m just too nervous still. I don’t think I’ll ever walk out of an appointment with more excitement than nerves but so far, everything is perfect and beautiful and I’m feeling hopeful and amazing. Ok phew it’s been very hard keeping this in for so long.”

The Lip Sync Battle cohost revealed in February that she was in the process of pursuing IVF treatments, showing a photo of her injections via her Instagram Story. Two years prior, Teigen suffered a partial placenta abruption, causing a late-term pregnancy loss. She and the Grammy winner, 43, honored Jack with a small memorial in October 2021.

“Took me a year but finally honored his little spirit with some blessings today,” she captioned an Instagram slideshow. “Hopefully some closure in my heart will happen now. Thank you guys for the kind words. It’s a process. Xx.”

The couple, who wed in 2013, have been open about their grief — but Legend was initially “hesitant” to publicly share their story. “It was difficult. … I think Chrissy was really right in encouraging us to share it because I think it really was powerful for a lot of people,” the songwriter told BBC Radio 4’s “Desert Island Discs” on Sunday. “Way more people than anybody realizes go through this.”

The Batman: Bruce and Catwoman’s Relationship Featured in New Trailer