Home Entertainment PowerUp 4.0, A Real Paper Plane That You Fly With Your Mobile 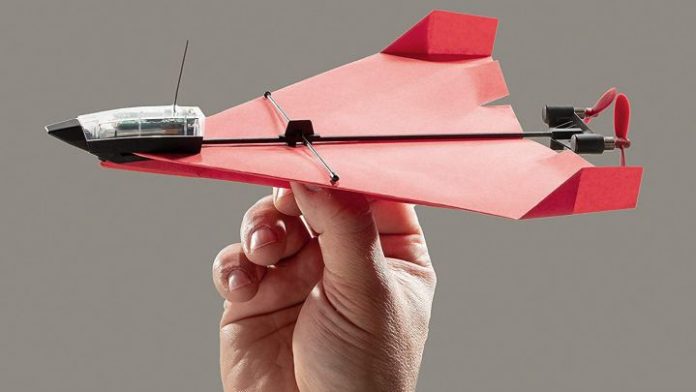 PowerUp 4.0, When mobiles were just for calling and you couldn’t use Minesweeper or Windows Solitaire, making paper airplanes was an effective way to kill time at the office or in class. It still is, but very retro, since if someone has 5 free minutes, the usual thing is that they dedicate them to the mobile.

Still, making paper airplanes is an origami art rewarded with a perfect flight if we are clever, or more rugged than that of Land as Can if we are clumsy, something that ended the most original procrastinating gadget in history.

Make paper airplanes and fly them with your mobile

And it is not necessary to spend +100 euros on a radio-controlled plane or € 20 on a tiny drone when we can have a mixture of office hobbies and piloting at the same time. Powerup Dart provides that in a very original way: through a kit that turns a paper airplane into a real flying airplane that we can steer.

And its assembly is as simple as folding a paper in the classic way in which it is usually folded to make an airplane, placing the flight kit and connecting it to the mobile.

The kit itself consists of a nose in which all the electronics are connected to a shaft that will keep the structure of the plane rigid and that ends in the propeller that drives it, and a landing gear with two functional wheels so that we can master the art. take off and land. The speed that the device can reach is up to 25 kilometers per hour, it recharges in 25 minutes and is built precisely to withstand shocks and impacts.

The best thing is that the paper that serves as the base can be folded to make up to 6 different designs, whether we want to fly at top speed, turn at full speed, maintain flight for a considerable distance or learn to pilot using a design that holds up well. the shocks.

The handling is done through the mobile app, whether we want to use the touch controls or move it through the sensor and the gyroscopes of the smartphone. Scheduled to do spikes, taps and other aerial tricks, the Powerup Dart swept its popular funding campaign 4 years ago, as its creators asked for $ 25,000 to support the project and raised nearly $ 570,000 within three weeks of completion, with a due date. delivery for Christmas of that year.

And today, in the middle of 2021, we have the latest iteration of that concept, evolving the base design into PowerUp 4.0, which takes smart paper airplanes to the next level by adding a twin engine and two small computers to “help stabilize the craft during the flight”.

If you like the proposal, this time you do not have to expect anything from Crowdfunding, since the PowerUp 4.0 can be purchased in Amazon Spain for example, at a price of 70 euros. You also have version 2.0 of the PowerUp for € 20.

The Dark Picutres: House of Ashes: Mystery Round in New Teaser