Home Entertainment Power Wash Simulator: How to find a secret hatch on Mars 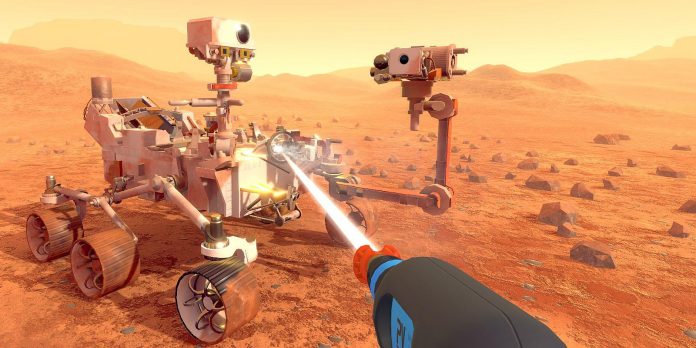 Players traveling to Mars to clean the rover in PowerWash Simulator may encounter difficulties when performing the most unusual task in the game due to the presence of a secret hatch of mysterious origin, which can be difficult to find. While the rover itself is the main focus of this particular special work, getting a satisfactory and thorough 100% deep cleaning requires the player to track down and clean a mysterious hatch on the surface of the Red Planet. Thanks to the arrival of PowerWash Simulator in the Xbox Game Pass, more visitors are coming to Mars than ever before, so finding the mysterious hatch will undoubtedly become a priority for the new gaming community of space repairers.

While most of the work in PowerWash Simulator is done in suburban courtyards and public spaces, players can also take their fancy washing machines into space in a special game mode. The rover in PowerWash Simulator is based on the real Perseverance Mars rover, which landed on Mars in 2021. It’s not immediately clear whether its delicate scientific instruments will be able to withstand proper pressure washing in real life, but in PowerWash Simulator, Martian dust, sand and strange slime must be cleaned from the rover to restore it to full working condition.

Even so far from Earth, PowerWash Simulator players should not look at the Sun, although this version of Mars is not as dangerous as in real life; the player’s washing equipment, spray nozzles and soap still work the same way. Proper cleaning of the rover itself is a difficult task, given that it is a complex mechanism with many nooks and crannies in which dirt can get stuck. However, once the player finishes working with the rover, they can track down the mysterious hatch.

While washing the ROVER, the player may have already noticed some strange footprints on the ground nearby. After the player has performed a thorough deep cleaning of the rover’s mast chambers using the PowerWash Simulator equipment, he can follow the tracks in the direction in which the rover’s cameras are directed. This should lead the player to a small slope nearby, where you can find a strange-looking pyramidal hatch with a very inappropriate garden gnome guarding it.

The player can then wash the dirt and grime off the hatch to get a 100% pass rate of a special Mars Rover level. Although the existence of this trapdoor and footprints may raise many big questions, PowerWash Simulator, unfortunately, does not provide answers. But in the end, the player is only here to clean the rover and get paid, not to do any kind of space exploration in the open world, so maybe it’s better not to worry too much about this little Easter egg.