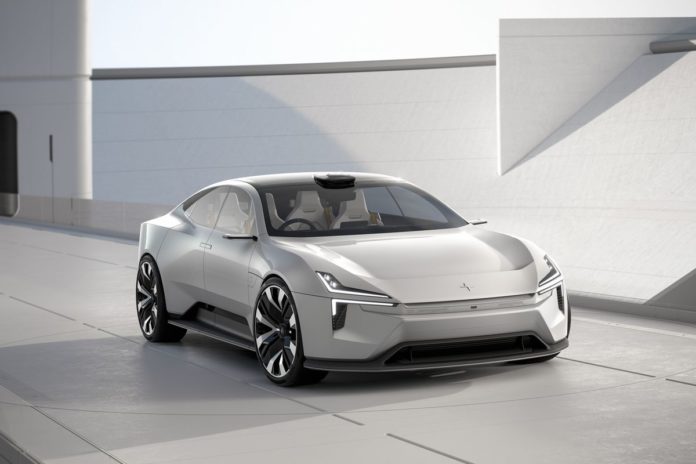 New images of Precept, the new concept car of the Swedish company Polestar, appeared. Images showing the interior design of the electric vehicle, which will be exhibited next week, have been published previously. The new visuals revealed the elegance and innovation of the exterior design of the vehicle.

Swedish vehicle manufacturer Polestar has two car models. The names of these models are chosen as Polestar 1 and Polestar 2 to be quite simple and catchy. The company, which is working on a new model, seems to decide on a more original name this time around. Polestar plans to reveal its future plans and an outline of forward-looking car designs with the new Precept model.

Precept is waiting to be exhibited within the ‘Geneva Motor Show’ to be held in Geneva. Today, car manufacturers use smoother and simpler transitions in new models. One of the models using these design styles that show that the age has changed will be Precept. The four-door vehicle will show how much the company’s design language has changed.

Exterior design:
At the front of the car is a section called SmartZone, where the radiator grille should be. SmartZone incorporates two radar sensors and one high resolution camera. The SmartZone surrounds Thor’s Hammer headlights.

The minimalist design used supports the smooth and streamlined structure of the car. If we give an example of these design features; we can say that the wing in the front of the car provides air flow to the hood.

Interior design and smart driver interface:
Precept has a smart ‘human / machine interface’ (HMI) screen in the driver’s part. These screens are now very common in new cars. Thanks to this screen, the sides and back of the car can be viewed without using a mirror. Many services such as navigation services can be used in the panel, which also has various security features. The ‘HMI’ screen, powered by Android and powered by Google, warns that the driver who looks at him too much should look at the road by using the eye tracking feature.

Most of the materials used in the interior design of Polestar’s vehicle have been carefully selected to reduce weight and plastic waste. The design chief of the car, Maximilian Missoni, explains the way Polestar followed in the design process as follows:

“The aesthetic structure of Polestar is based on the latest technologies instead of modeling the automotive designs of the past. We see technology as a tool that solves people’s problems and we make designs based on this idea. We are sailing on a new adventure in innovative and luxury cars with sustainable materials and high technology. ”