Home Entertainment Pokemon VGC: A Guide to the Held Item 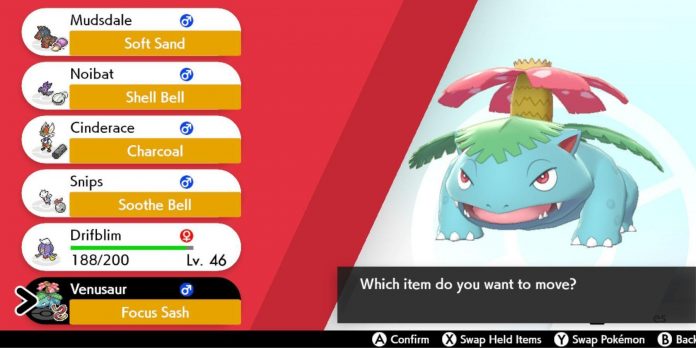 Like in standard gameplay, competitive Pokemon players participating in the Video Game Championships (VGC) tournaments can utilize certain items to assist in Pokemon battles. A good battle strategy consists of using the correct items and can be a turning point in any match with the right timing.

There are restrictions on what items can be used in the VGC. The only items allowed are held items and berries, both of which Pokemon themselves can hold and use in the middle of a match. Things such as Potions, Full Restores, and Revives are not allowed. Nevertheless, players have many items and consumables to choose from in competitive Pokemon.

Held items can be found throughout gameplay in various places. They come in a few types: HP recovery, status changing, stat-boosting, and a few others that don’t fit neatly into those categories. In-game, they are found under the Other Items tab, along with short descriptions of their use. These items are usually reusable, but some of them will only work with specific Pokemon.

Berries, also considered held items, are consumable fruits that grow in various locations. Berries are only used once and fall into the same categories as non-consumable held items. However, there is a chance a Pokemon won’t like the taste of some berries, and it will usually backfire by causing confusion.

Some held items can restore HP or boost HP-stealing moves in a match. They are best used on Pokemon that can take a decent amount of damage to get the most out of them.

Examples of these items are Leftovers, Shell Bells, and Big Root. Berries that restore HP kick in automatically once a Pokemon’s HP level reaches a certain point. These include Aguav, Mago, Wiki, Iapapa, and Figy berries.

Some items are meant to make Pokemon more powerful or give them temporary abilities — held items can work both offensively and defensively in competitive battles.

For instance, players can maximize their damage output by using a Rocky Helmet, which damages the Pokemon that makes contact with the holder. Using a more defensive strategy, Air Balloon makes the user resistant to Ground-type moves. With moves like Earthquake popular in the meta, this item is very useful. Another defensive item is Heavy-Duty Boots, which protects the holder from battlefield traps.

Stat-boosting items give an increase to speed, defense, or attack. Speed control is particularly useful in VGC matches; making certain Pokemon faster can change the battle outcome entirely, especially when paired with items that produce stronger offensive and defensive base stats. Choice Scarf, Eviolite, and Snowball are all stat-boosting items.

Additionally, certain berries can raise attack and defense stats, like Liechi and Ganlon berries. There are also others that lessen damage from type-specific moves such as Roseli, Passho, and Rindo berries.

There are some commonly-encountered items in the VGC that have surprising methods for tipping the match in someone’s favor.

For example, some items like Flame Orb and Sticky Barb have a give-and-take benefit system. A Flame Orb burns the holder, but this prevents it from getting another status condition. Pair this with the ability Guts, and it can be an offensive play on the player’s part. Sticky Barb works somewhat similarly by causing damage to the Pokemon holding it, but it can transfer to the opposing Pokemon when the holder is hit with contact moves.

Another item that is affected by physical moves is the Eject Button. When the user is hit with a move that causes any amount of damage, it is switched out for a Pokemon of the player’s choice. This works well with glass cannons, because players can switch them out before they take too much damage and potentially dish out more damage.

Some Pokemon have abilities or moves that interact with held items. Some of the possible interactions include stealing, restoring berries, boosting their effects, preventing Pokemon from eating consumables, or disabling item effects in battle. These moves and abilities can give players the upper hand in a match and surprise their opponents.

Some common abilities that affect held items are listed below:

Harvest: Will sometimes restore an eaten berry after a turn.

Pickpocket: If the user’s Pokemon doesn’t have a held item, then they can steal an opponent’s held item after a contact move such as Tackle or Sucker Punch.

Typical moves that affect items include the following:

Thief: The user can steal their opponent’s held item.

Knock Off: The target’s held items will be disabled for the rest of the battle.

Switcheroo: The user and target will trade held items. This move pairs well with the Frisk ability.

Netflix: Why does a legendary chess player insist on suing Queen’s...