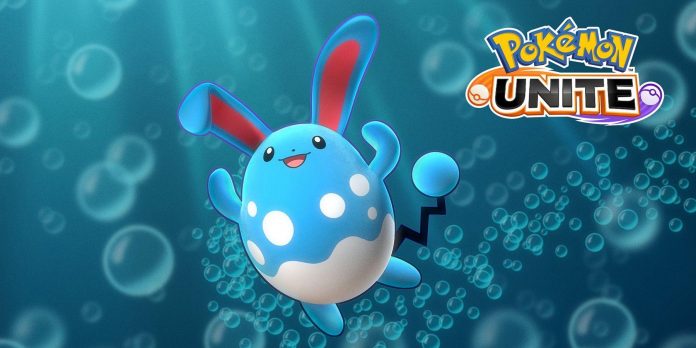 Azumarill is the second-most recent addition to the absurdly popular MOBA Pokemon Unite, behind Delphox who was released in June. Despite its adorable appearance, Azumarill is actually quite the aggressive powerhouse. This Pokemon is literally designed for 1-on-1 encounters and really exceeds between close and medium-range, spacing auto-attacks in between abilities. Thanks to its passive, Huge Power, Azumarill always crits when hitting one enemy (for 150 percent instead of 200 Attack Damage) and never crits when hitting multiple.

On paper, this sounds like Azumarill has broken amounts of Attack, but this passive is exactly why the Pokemon is strong in the early-game and weak in the late game, where team fights are a constant. And, since its release, Azumarill has received numerous buffs for its damage, specific moves, and to its overall health to make it better, so let’s talk about what Build currently works best for this little Water-Fairy gremlin in Pokemon Unite.

Let’s start things off by talking about where Azumarill players tend to go in terms of their Lane, as well as how they go about picking their moves as they level up.

Now, Azumarill works both as a Top Lane solo All-Rounder and as a fast-clearing Jungler. The Jungler variation works best towards Azumarill’s design, as it’ll get tons of crits against the Jungle Pokemon, but it does struggle a bit with chasing down opponents and mobility in general. Meanwhile, a Top Lane variation is entirely focused on Azumarill locking down the tower of Top Lane, poking from afar with Water Pulse, and melting anyone who gets too close.

Originally, there was more of an argument for a Play Rough + Aqua Tail build, but with every change to Azumarill, Whirlpool + Water Pulse became more and more of the obvious choice. Similar to the changes with Hoopa, Azumarill has had a lot of build changes in accordance with its stat changes. That said, a Play Rough + Aqua Tail build can still work, but players will need to roam for 1-on-1 encounters and have to focus on picking off single targets in team fights. The Standard choices for Moves look something like this:

What Held Items & Battle Items To Use

Now, the Held Items Azumarill uses have been up for debate since the Pokemon was released, and have always included some configuration of the same group of items, those being:

There are two things to look at when picking any of Azumarill’s Held Items: does it increase crit damage/frequency of attacks and does it synergize with Belly Bash or give Azumarill more survivability? If either of those things is true, it’s an item that will likely work well on this Pokemon. However, the most commonly used items for this relatively new Watery All-Rounder are Scope Lens, Weakness Policy, and Focus Band.

When it comes to Azumarill’s Battle Item choice, this is honestly up to the individual. Azumarill struggles with Mobility, so items like X Speed and Eject Button make it easier for it to get around the map. Alternatively, items like X Attack and Full Heal buff its ability to do damage during encounters. It all depends on what type of Azumarill the player wants to play, but X Speed seems to be the most popular option among the player base.

Finally, it’s time to go over the Build as a whole as well as how Azumarill “ranks” in comparison to all the other playable Pokemon. In terms of a “ranking”, Azumarill tends to sit around a B-Rank, not being amazing by default but also not weak either, it’s another one of those Pokemon that’s hyper-dependant on the player’s skill level. Now, with all that information combined, let’s go over the final “strongest” build for Azumarill, which can be seen in the image above or seen in the table below.

With this Build, Azumarill has a lot more mobility, can easily level on Jungle Mobs, deals a ton more damage, especially when low on HP, has both a close and long-range attack option, and can heal itself pretty reliably with Whirlpool. Using this Build, Azumarill can even participate in chaotic team fights and still contribute even without crits thanks to its damage-buffing Held Items and AoE Whirlpool sustain.

That said, players should absolutely focus on farming in Jungle until they evolve, and then look for encounters they can get some single-target attacks before going back to roaming and clearing out Drednaw and Rotom spawns once they’re up.

Pokemon Unite is available for download on Nintendo Switch and Mobile devices.