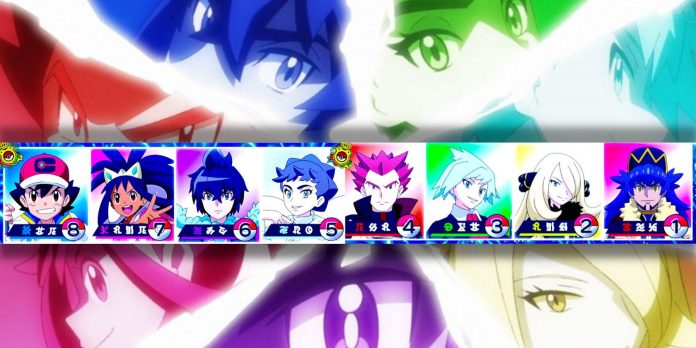 This article references details regarding episode 115 of Pokemon JourneysThe World Coronation Series is arguably the largest event in Pokemon history, with over 10,000 contestants involved in the competition. The final showdown is set to start from episode 115 of Pokemon Journeys, titled “The Curtain Rises! The Masters Tournament!” where the first rounds of Masters Eight match-ups are revealed.

The teaser trailer for the final event of the World Coronation Series has been released, providing some much-needed details about the first round in the Masters Eight line-up. Having made it to the top, these trainers and their Pokemon will be put to the test in Wyndon Stadium in the Galar region as Leon defends his title as the #1 Monarch.

RELATED: Is Cynthia Set to Win the World Coronation Series?

As expected, several of the Masters Eight trainers have pulled an unexpected Pokemon out of their hats to throw their opponents off their game, unprepared for the surprise battle tactics. Not only is Leon foreseen to debut his Rillaboom during his match against Alain, but in a surprising turn of events, the Monarch plans on using his Dynamax advantage on Rillaboom as opposed to his Charizard as predicted. Alain seems set on having a battle of the Charizards (or maybe the writers are keener), because he does not use his dragon to easily counter the Grass-Type Pokemon, but appears to send his new Chesnaught out instead.

As epic as Alain’s Charizard X is, it still may not stand a chance against Leon’s dragon, even with the additional advantage of a Dynamax evolution. Leon has shown time and time again that his skills with Charizard surpass any other trainers, and it seems highly unlikely that the undefeated champion would supply the first loss of the Masters Eight finals. The teaser trailer shows Charizard tapping into his Ancient Power, a highly-specialized move that is undoubtedly effective against Dragon-Types and likely to knock Alain out of the running.

Unfortunately, it seems that there may not be a battle of the Dragon Masters in the World Coronation Series as many had hoped because Lance is set to fight Diantha for his first appearance in the finals. Like those before him, Lance also has a new Pokemon to introduce to the fold as his formidable Hydreigon takes to the stage, and of course, Dragonite could not miss out on such an important fight! Lance is also seen with a Dynamax Pokeball in hand, suggesting that his infamous Red Gyarados will join in on the fun as his team fights for their spot into the next round.

Diantha will likely counter whichever Pokemon Lance chooses to Gigantamax with her Mega Gardevoir, arguably one of the strongest Fairy/Psychic combinations in existence. As Gardevoir has been the only Pokemon viewers have seen Diantha battle with, the rest of her team has been widely up for debate, but it appears that Aurorus is expected to make an unexpected appearance. This powerful Rock/Ice Fossil Pokemon will undoubtedly give Diantha the upper hand in this competition, not to mention a clever counter to her dragon-enthusiast opponent.

In a girl fight that fans have been dying to witness, this battle of the babes seems to heavily weigh in Cynthia’s favor. Iris is only seen alongside Haxorus in the teaser trailer, although the dragon is seen fighting both Milotic and Garchomp, suggesting that Iris’ dragon was either successful in battle or called back after its initial release. Considering that Cynthia’s Milotic knows Ice Beam will give her the advantage over the Dragon-Type, possibly forcing Iris’ hand to recall her Pokemon before it’s too injured to continue.

The spotlight is on Cynthia again as she finally debuts her Mega Garchomp in all its glory and, if this match-up is to follow the same formula as the first round between Lance and Alain, then fans expect Iris’ Garchomp to rise to the challenge. The Dragon Master could possibly pull out a Key Stone of her own but, against the second-highest-ranking Pokemon trainer, there seems little hope for Iris to walk away unscathed.

While these two may have quite a history together, dating back to “A Hole Lotta Trouble” in 2003, they have yet to actually battle one another, until now that is. Ash sticks to his new favorite duo of Pikachu and Gengar, although it is unclear who will be the recipient of his Dynamax treatment. Steven also shows off some new additions to his Pokemon collection with a Cradily followed by his iconic teammate, Mega Metagross.

In the teaser trailer, Steven’s Mega Metagross is seen in the arena with Pikachu which is not the best situation for the Alola Champion, as his Gengar would be much better suited for this situation as the perfect counter Pokemon. However, Pikachu deserves some credit, seeing as he defeated Alain’s Metagross in the past and could therefore apply the same strategy against Steven, but this time in his Mega Evolution state. The outcome of this battle is uncertain, but for the sake of fan service, Ash will hopefully advance to the next stage.

Single-elimination Tournament or Round Robin?

Fans have been anticipating the final moments of the World Coronation Series for some time now, but it looks like the viewers won’t get to see all the match-ups that they were hoping for because the Tournament will apparently end with a single-round elimination. This means that the winner of each battle will advance to the next round, but it seems that the loser may be out of the running thereafter. Hopefully, the writers will realize the huge opportunity that has been missed and alter the format to a round-robin style, giving each of the Pokemon trainers ample opportunity to prove their worth after more than just one final match.

As it stands now, the highly anticipated Steven vs Leon event may never come to pass, unless Ash is knocked out in the first round; two scenarios that many fans are unhappy about. Matching up the higher ranking trainers with the lower ranking ones does not seem like the most even-handed way to do things, as it appears to be setting certain contenders up for defeat. When looking at each battle by ranking, the matches seem wildly unbalanced and if it is indeed a single-elimination finale, then this is essentially a competition between the top four contenders, with the only fair match-up sp far being between Lance and Diantha.

NFT: Meme of The Girl With House On Fire Sells for...