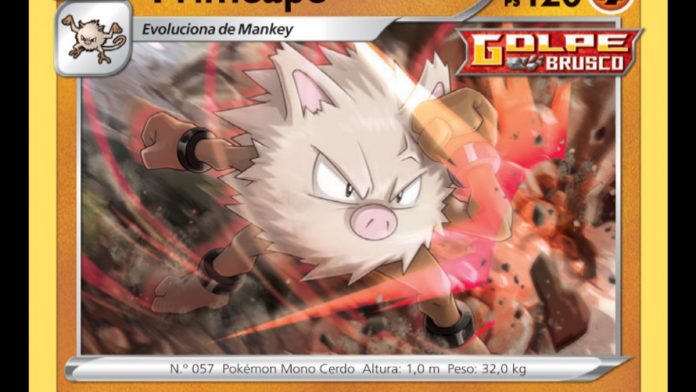 The expansion of the Pokémon Trading Card Game called Sword and Shield-Combat Styles goes on sale this March 19.

The Pokémon Company International has presented a new card from the expansion set Sword and Shield – Combat Styles of Pokémon Trading Card Game, scheduled for this March 19, 2021. After knowing this fifth set of the Sword and Shield series, which introduces A new combat mechanic, Rough Strike, is the time to welcome Primeape, a card with combat style.

Rough Strike-style Primeape, as we can see in the image, is a card that allows you to assault the battlefield by evolving Mankey (Phase 1) and has Field Trapping, a movement that requires energy and is capable of discard an opponent’s Pokémon if it has a Stadium in play; added to 20 points of damage.

On the other hand, Rough Strike-style Primeape has Enrage Strike (50 damage points; two Fighting energies), with which it does 50 damage for each of our Benched Pokémon that have a damage counter. Let’s suppose that in our team we have three Pokémon with at least one damage counter; in that case, this move will deal 150 points of damage.

The Sword and Shield-Combat Styles expansion, the fifth of this generation, includes a new mechanic inspired by the combat styles we saw in Pokémon Sword and Shield – The Island of Armor with Urshifu.

Two fighting styles have been introduced. The first, Hard Hit style, which unleashes powerful attacks that can Knock Out an opponent in one hit; on the other, the Fluid Strike style, which uses agile and stealthy attack techniques with which a user can attack his opponent when he least expects it.

All Pokémon can have a combat style in the Pokémon TCG; To identify them, just check if they have the Hard Hit or Fluid Hit logo stamped on them, each with its own abilities and characteristics. Also, even Trainer and Energy cards.

Some of the cards already known in this regard are Urshifu Rough Strike V, Urshifu Fluid Strike V, Tyranitar Swift Strike V and Empoleon Fluid Strike V. Also included in the new expansion Sword and Shield-Combat Styles from The Pokémon Company International. Additionally, Trainers will be able to meet Urshifu Rough Strike VMAX and Urshifu Fluid Strike VMAX in their Gigamax forms, as well as in Island of Armor, the expansion for Pokémon Sword and Pokémon Shield for Nintendo Switch.

The Sword and Shield-Combat Styles expansion goes on sale this March 19, 2021 worldwide and will be available in upgrade packs, Elite Trainer Boxes and collections, such as this pack: