Home Game Pokémon SV Guide – How to Get Kingambit 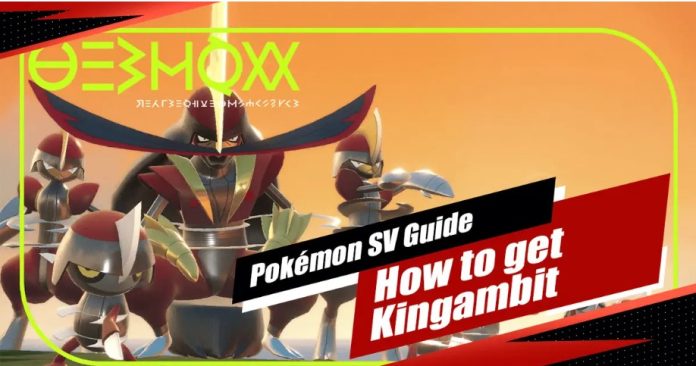 Not everyone was informed, but Pawniard received the third stage of evolution in the Pokémon Scarlet and Violet series. In this guide Pokémon SV — How to get Kingambit.

Kingambit — Pokemon “Big blade”, dark and steel type. This humanoid bipedal Pokemon originated from Bisharp and is the only known Pokemon that can learn the Kowtow Cleave technique. In Pokédex , his entries are as follows:

Scarlet: “Only Bisharp, standing above everyone else in his huge army, can evolve into a Kingambit.”

Violet: “Although he commands a huge army in battle, he does not know how to develop complex strategies. He’s just using brute force to keep pushing.”

Where can I find Pauniard?

Pawniard can be found in the Southern Province (First Zone) or the Eastern Province (Third Zone). You can find Pawniards near the banks of the river, so they won’t be that hard to find. After passing Victory Road, you can also find Pawniard in Area Zero.

The evolution from Pawniard to Bisharp is a difficult task as this Pokemon evolves at level 52. You can speed this up by using the auto combat feature, but it may take you forever.

An easier way to do this and complete your pokedex is to simply catch a Bisharp yourself. Go to the Northern Province (the second zone) and throw a pokeball on its way, and you will be one step closer to getting a kingambit.

How to get a Kingambit?

This method of evolution is a bit difficult to understand, but fortunately we are here to tell you how to develop Kingambit. First, you need to get the Leader’s Coat of Arms from a Bisharp surrounded by Pauniards. They can be found in the Northern Province (second zone) in the area of bamboo thickets. Catch yourself a Bisharp and check if he holds the Leader’s Coat of Arms. Again. It should be Bisharp, who heads the group of Pauniards. If he is alone and without Pawniards, this is not the one you want to catch.

The next step in how to get a Kingambit is to become the best Kingambit in the neighborhood (well, at least for the next three Bisharps). You must defeat three Bisharps surrounded by a Pauniard. Do not take into account that they may take time to appear, so keep an eye on the bamboo thickets to defeat the three Bisharps.

Do it all right and all that’s left is to level up the Bisharp by one level with the help of autoboys, defeating wild Pokemon, defeating trainers or with the help of rare candy. When you reach the next level for Bisharp, you will be asked that your Pokemon is ready for evolution.

There are many interesting new ways to develop Pokemon in the Paldea region, so be sure to visit the ClutchPoint Gaming page to learn more Pokémon SV guides, such as this how to get Kingambit. Good luck, Coach!

Equipment “Warzone 2” — how to get equipment during a match