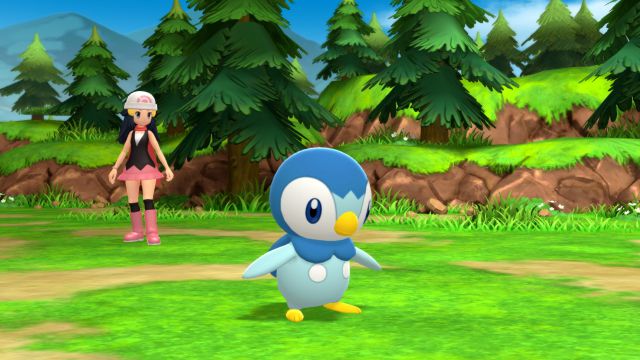 Pokémon Shiny Diamond: This November 19, the remakes of the fourth generation arrive on Nintendo Switch, two of the most influential and transcendent installments of the saga as we know it. The fourth generation of Pokémon is not just any. We are talking about the beginning of the era of the double screen, the first where the Internet had something to say in a fundamental pillar of the license: communication. Sinnoh is not just any region either. The archipelago that gave birth to the god of Pokémon, Arceus, and where some of the most momentous events in the universe are narrated, now celebrating his twenty-fifth anniversary. Where we first dive underground. Where trading Pokémon with people thousands of miles away became a reality. It’s funny, but Diamante and Perla were the deliveries that established a very specific language that future generations would later drink from. It is no coincidence that this is where the long-awaited Pokémon Legends Arceus takes place.

Almost fifteen years have passed since then. Pokémon has evolved; we also. The young teenagers who took advantage of the bus trips back home to play, the ones who turned on our Nintendo DS with a smile on our face knowing that a new generation was beginning, we now see those same store windows at Palkia and Dialga and imagine, irremediably adults, to our self of then. We are still us, Sinnoh wants us to come back one more time.

This November 19 we will have the opportunity to rediscover two decisive episodes, not only for the Game Freak saga, which chose the name Sinnoh (mystery in Japanese) in reference to the number of secrets that make up this beautiful place, but surely also determining for ourselves as fans of the series. We have grown, but Professor Serbal will continue to wait for us; Team Galaxia will once again know a global threat and we will listen to that exalted sound repertoire again. Chimchar, Turtwig or Piplup, that’s the point. It’s time to put the scarf back on: Cintia is waiting for us at the end of Victoria Street.

The pleasure of walking around Sinnoh again; a new journey, a familiar territory

If there is one thing that Pokémon Diamond and Pearl made clear to us, it is that its region, Sinnoh, was the most complete and varied to date on Game Freak. Its creators, led by Junichi Masuda, came to refer to these installments as the consummation of the idea born twenty-five years ago. It is impossible not to remember the lakes; the ascent to Monte Corona; our first visit to Jubileo TV; the music of Route 209 with its two towers. The region where all kinds of ecosystems take place returns renewed on Nintendo Switch.

During these last months, since the moment Pokémon Shiny Diamond and Shining Pearl were announced, we have known aspects that invite us to want to revisit these editions, now benefited by the technological benefits of the hybrid console and the quality of life details that we have seen during the most recent deliveries. There are two aspects, however, that we must emphasize above the rest. Because they can change the way we live the Sinnoh adventure and can greatly lengthen our playing hours.