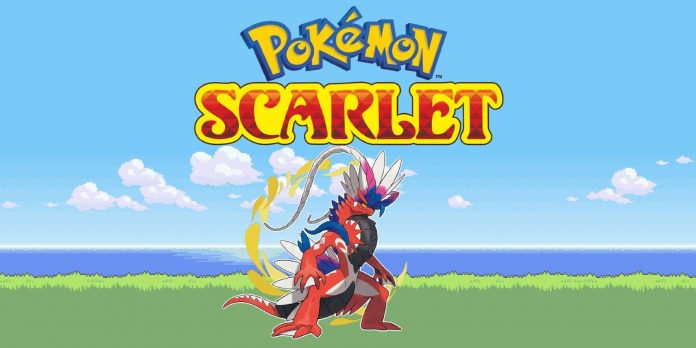 While fans of the Pokemon franchise are waiting for the release of Pokemon Scarlet and Violet, they have been thinking a lot about what these games can offer. These fans even started creating interesting fan art based on the available information. In the last example, one creator demonstrated what the title screen of Pokemon Scarlet and Violet might look like on a Game Boy Color.

The ninth generation of Pokemon was first introduced in February this year and will officially begin with the release of Pokemon Scarlet and Violet in November 2022. At the moment, only a few Pokemon of this generation from these games have been officially confirmed, including the starters of the region and a couple of legendary Pokemon.

This nostalgic creation is created by u/HiraWhitedragon and is the perfect throwback for Game Boy Color fans. This creation is a darkened version of what looks like Corydon, the legendary Pokemon associated with the Pokemon Scarlet. In this 8-bit fan art, a Pokemon shape moves through a desert area while the entire scene is under the name of the game. For those who played early Pokemon games, especially for those who played on the Game Boy Color, it should be immediately recognizable. Like Pokemon Gold, Silver and Crystal, this creation represents the most recognizable legend of the game, which moves along with the flow of the screen.

[OC] The title screen of the Pokémon Scarlet Version, but in the style of the Game Boy Color from PokemonScarletViolet

The title screens of early games depicted the Pokemon that the game was most famous for, and then they alternated through a list of regions. This has moved on to something much bigger than what viewers are seeing here with the release of Pokemon Gold and Silver. Although Pokemon Scarlet and Violet won’t see life on the Game Boy Color, this creation actually perfectly matches the style that this portable device was known for.

While the title screens of modern Pokemon games are much more intense and visually impressive, fans of the original games will probably have a weakness for title screens in this artistic style. This 8-bit style will always evoke nostalgia among those who took part in the early games of the franchise.

Again, although the 8-bit style is likely to always appear in the creations of fans and in other franchises, the visual effects of modern games will always be impressive. They are also unlikely to return anytime soon. In any case, this player demonstrated what Pokemon Scarlet would have looked like if it had been released in the late 1990s.

Khloe Kardashian goes out for dinner in Malibu after giving birth...

The Cassie actress sued HBO for affecting her career with her...