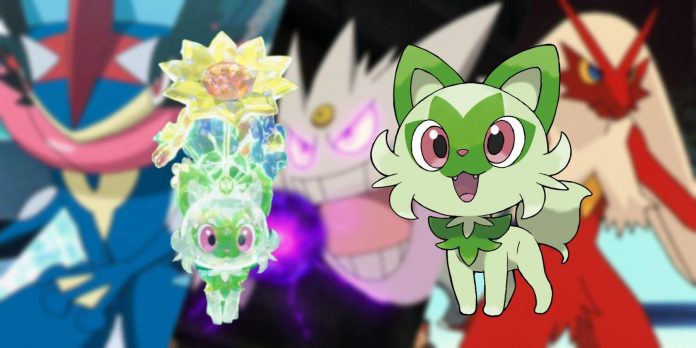 For many Pokemon fans, one of the best moments in any new mainline game is choosing one’s first companion, and Pokemon Scarlet and Violet‘s starters have been enjoying a lot of Internet attention. While little is officially known about all three starters and their evolutions, leakers have shared information about them in the five months since the reveal of Gen 9, including potential type combinations. Pokemon Scarlet and Violet’s Sprigatito is said to evolve into a Grass and Dark Pokemon, according to these leaks.

Some discussed Scarlet and Violet’s Fuecoco and its Hidden Ability, which could be related to food – possibly something like Gluttony, Ripen, or even Harvest. Yet it has been said that the strongest starter Pokemon when its Hidden Ability is unlocked will be Sprigatito, even though its Hidden Ability was never revealed. Because there are many Abilities that could make Sprigatito’s evolution an outlier, it’s worth taking a look at which ones have become incredibly powerful in mainline games up to Pokemon Sword and Shield.

Shadow Tag is the Ability that made Mega Gengar an incredibly powerful Pokemon in Gen 6, as this Ability is invaluable when it comes to countering strategic switches and even making some Pokemon incapable of using their moves. In Gen 8’s meta, Gothitelle became a strong answer to Pokemon that frequently switched out, even though it didn’t stop the likes of Incineroar using Parting Shot or moves like U-Turn. In Pokemon Scarlet and Violet, things could change and make something equivalent to Shadow Tag a good Ability for Sprigatito’s evolution to get.

One of the most notable examples of Speed Boost being a powerful asset comes from Blaziken in Gen 6, which not only had access to this Ability, but also to STAB moves like Fire Blitz and High Jump Kick to sweep most teams on its own. Because Speed Boost grants +1 Speed at the end of every turn, combining this with stat-boosting moves like Swords Dance make any Pokemon harder to counter. Having a Grass/Dark critter in Scarlet and Violet that also uses Speed Boost could make it quite powerful if it gets access to moves like Leaf Blade, Dark Pulse, or Crunch.

Moxie is the Hidden Ability of Pokemon like Gyarados, Mightyena, Honchkrow, and Salamence. Commonly associated with Dark-type Pokemon, Moxie would make a lot of sense as the Hidden Ability of Sprigatito’s evolution considering its alleged type combination. What this Ability does is grant a +1 to Attack for every knockout the user scores, which can snowball one’s success easily if the base stats of the user and its move pool are decent. The only limit that Moxie imposes is that it won’t activate if the user’s Attack stat is already +6 stages, making further increases do nothing.

Magic Guard makes the user take damage only from direct attacks, meaning that Pokemon with Magic Guard are effectively immune to all damage coming from other sources. Examples are the residual damage from Burn and Poison, the weather damage from Sandstorm and Hail, entry hazards such as Stealth Rock, or damage from moves like Leech Seed and binding secondary effects. Most impressive is the fact that Magic Guard prevents the user from suffering damage when they are holding a Life Orb despite the Pokemon still getting this item’s damage boost, which could make Sprigatito a huge threat in Pokemon Scarlet and Violet.

Adaptability is particularly powerful on Pokemon that already have a good set of moves which have same-type attack bonus (STAB). What Adaptability does is provide a further 50 percent damage increase to STAB moves, making them deal twice their base damage overall. This could be incredibly broken when combined with Pokemon Scarlet and Violet’s rumored STAB Tera move, an attack that will supposedly grant all Terastallized Pokemon the ability to deal STAB damage. With Adaptability, that STAB damage would still be an extra 100 percent instead of the regular 50 percent.

Much like Moxie, Prankster is an Ability typically associated with Dark-type Pokemon, and it gives priority to all status moves. Prankster would be incredible for a starter to have in Pokemon Scarlet and Violet because it would make the user go first in most scenarios where they aren’t directly attacking, and status moves are often game-changers in difficult battles.

Lastly, what would probably be the strongest Hidden Ability for Sprigatito’s evolution is Protean (or Libero). These Abilities make the Pokemon change its type to match that of the move it is about to use, causing STAB damage with every attack regardless of its original type combination. These Abilities made Pokemon like Greninja and Cinderace definitive threats on the battlefield, as Protean or Libero’s effect can also be used to gain another type and resist opposing moves, much like Terastallization. Speaking of which, the interaction between Pokemon Scarlet and Violet’s Terastallization and Protean could be problematic, and worth watching out for if it returns on any monsters in Gen 9.

Pokemon Scarlet and Violet release on November 18, 2022, for Nintendo Switch.