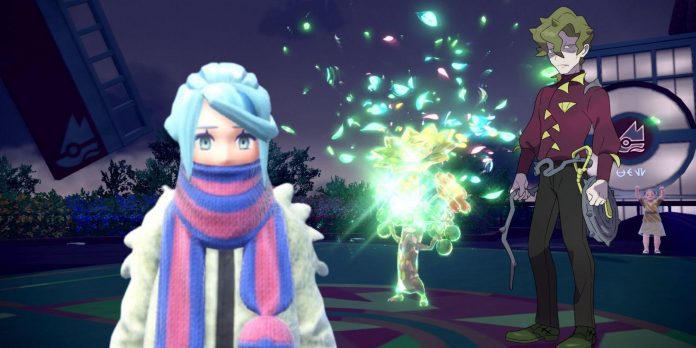 In the August trailer for Pokemon Scarlet and Violet, a new trick for the upcoming Gen 9 games was shown — Terastallization, a phenomenon that allows trainers in Paldea to change the type of their Pokemon once per fight. The way Terastallization works is that all existing types that a Pokemon may have before it is Terastallized are removed in favor of the Creature’s Terast type, which may be the same as one of the base Pokemon types or any other existing type in the series. This means that Pokemon Scarlet and Violet battles can be even more exciting than in the past, thanks to the many strategies that can be used with Terastallization, both in attack and defense.

The latest trailer for Gen 9 games featured a battle against one of the gym leaders Pokemon Scarlet and Violet, in this case, a Grass-type specialist named Brassius. The short clip provided fans with a lot of useful information, for example, the fact that gym leaders can also have an ace not from the 9th generation, as well as the fact that they use Pokemon that do not necessarily have the same type as their specialization. what is usually expected of champions. In the trailer, Brasseus also allows his Sudowoodo Terastallize to turn into a grass-type Pokemon, which, on the one hand, makes sense, and on the other, it means that gym battles can be even easier than expected.

Why Pokemon Scarlet and Violet’s Gym Battles Can Be Easy

Brassius Terastallizing Sudowoodo into the Grass type can be attributed to coincidence, but the fact that the trainer has a dialogue line characteristic of this Pokemon means that the gym leader will always use the Gen 9 trick in this way. This can be problematic because Sudovudo is usually a purely stone creature that deals super-effective STAB damage to flying, insect, fire and ice type pocket monsters. These are all types, which, in turn, cause super-effective damage to grass Pokemon.

So in every battle against Brasseus, Pokemon Scarlet and Violet players can safely use Flying, Bug, Fire and Ice Pokemon to deal with the gym leader’s team and his ace, because Sudowoodo will always Terastallize into a grass type, becoming weak to their attacks. The Pokemon aces of Brasseus will most likely retain the stone-type movements, which will still cause decent damage to the Pokemon against which they are super-effective, but they will always lose their STAB multiplier, which is wasted in this battle. This also makes Brassius’ use of the phenomenon of terastals ineffective from the point of view of strategy.

The problems that Sudovudo Brassius will face are likely to be shared by other gym leaders, and the use of Terastallization by a grass-type specialist is likely to be similar to the use of other gym leaders. Instead, AI could use the Terastallization of the Pokemon Scarlet and Violet much more effectively, allowing gym leaders not to have a fixed type of Ter for their Pokemon that matches the type of their gym, but instead use types that usually resist attacks that can easily defeat their specializations. For example, the aforementioned Sudovudo can Terastallize into the Stone type that it already is, which means that it will not only retain the usual STAB damage of its moves, but also get a positive effect to it.

Some versatility here can make every gym battle more exciting and refreshing, rather than a scripted encounter that can be completed using Pokemon that deal super-effective damage against the specialization of the gym leader. This also removes all the advantages of having certain Pokemon in the gym leader’s team, which are by nature dual types, since any offensive or defensive advantage of these types will always be lost due to terastallization. Overall, the current Pokemon Scarlet and Violet system seems to make sense from a thematic point of view, but it significantly reduces the difficulty of gym battles.

Tomorrow belongs to us: the designer talks about sets!