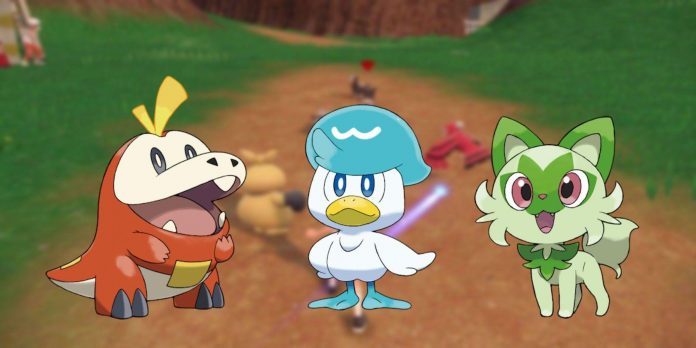 Pokemon released the fifth Pokemon Scarlet and Violet trailer today, and while it didn’t show many new Pokemon compared to what one would expect two months after launch, it still went through the three storylines hinted at last month. One of them is dedicated to passing the Gym Challenge and sending you to your own Victory Road in the Paldin region to challenge the Elite Four and the regional Champion, the second is to confront a new villainous Team of Stars, and the last is a battle with a Titan Pokemon. Since Pokemon Scarlet and Violet players will apparently be able to choose which path to take first and what their exploration of Paldea will entail, the attention to the open world map is huge.

In today’s trailer, a new way of fighting in Pokemon Scarlet and Violet was announced, which perfectly matches the setting of Gen 9 games with an open world. Usually Pokemon Scarlet and Violet allow players to send their pocket monsters to the fields, exploring them with them, and the Auto Battle feature gives them the opportunity to send this Pokemon in a certain direction to search for items and possibly fight other creatures without the participation of a trainer. orders. This is a revolutionary addition to the main Pokemon games, but it can be controversial for many reasons, the main one being that games can become disproportionately easier.

Why Pokemon Scarlet and Violet Autobits Can Be Problematic

Fighting your own Pokemon has always been the mainstay of the franchise, and it is often used in both games and TV shows as a plot to prove that trainers can really develop their connection with pocket monsters by fighting them. In many Pokemon games, there were restrictions on which creatures trainers could use, depending on their abilities and medals in the gym, which made it impossible to command Pokemon whose level exceeded the set thresholds. There were similar situations in the TV show too, and Ash’s Charizard was one of the most iconic.

Thus, the automatic Pokemon Scarlet and Violet battles contradict this principle, because trainers can use any Pokemon they like for passive combat, without any indication of the movements they should use. Not only does this feature break the core tradition, but it can also make Gen 9 games too simple, which has already been a hot topic of discussion for many years as more and more features have been added to the series. An example is the controversial Exp. Share, which has gradually simplified the training of Pokemon in all the games he participated in, and it is impossible to turn it off.

In Pokemon Scarlet and Violet, auto-expressions allow players to passively receive items and experience, which means that it will be even easier to develop Pokemon and train them. This can be even more problematic if Auto Battles includes Exp. Share as well, as this may mean that trainers can potentially farm levels for their entire team without doing anything, simplifying the whole experience and battles in general. Even if that’s not the case, having a Pokemon that can go out into the wilds on its own to get items and levels can become the main method of battle in the 9th generation, leaving new players with virtually no experience when it comes to coaching. battles.

There may also be other issues with auto-fights, such as colliding with a shiny Pokemon and automatically defeating it without being able to stop what’s happening, or when the trainer doesn’t even notice. Pokemon Scarlet and Violet’s open-world environment can prove to be an extreme form of game improvement with Auto Battles, and this feature should have more configurable options than just an on and off switch. In general, autobattles won’t necessarily be a bad thing, but they are likely to cause controversies over time that are difficult to prevent.