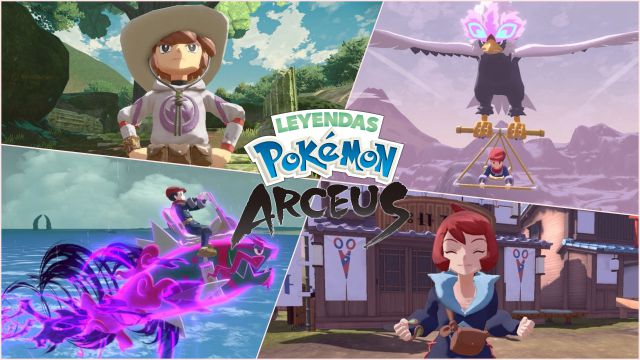 Pokémon Legends: The Pokémon Company shares new details about Pokémon Legends: Arceus, the new installment that will arrive on January 22, 2022 on Nintendo Switch. Pokémon Legends: Arceus boasts exploration in its new trailer, which you can see at the top of this news. The Sinnoh of the past is known as the Hisui region, a vast piece of land “long before all the well-known passages and cities” of Pokémon Pearl and Diamond existed. From The Pokémon Company they share new and juicy details about the journey that we will undertake on January 28, 2022 on Nintendo Switch.

During the first stages of the trip, we will receive the Arceus Mobile, a special artifact that “houses a strange power” that will serve as a guide during the adventure. During the exploration, players will encounter some Pokémon that are stronger than usual, which will present a special appearance in which bright red eyes stand out. These will be called “Alpha Pokémon”.

However, there is an even more special category among certain Pokémon. As the company indicates in a press release, some “have received a mysterious gift” that makes them even stronger. They are known as “stately” and some of them will not be hostile. In fact, they have people as caretakers, who preserve their territory. These faces call themselves Guardians.

Another of the points in which it affects is Villa Jubileo, the center where all the activity around your research takes place. Through its streets we can access various facilities, such as the tailoring and hairdressing salon, the photographic studio, the bazaar, the workshop or the sheepfolds. The latter is the place where you will keep all those Pokémon that you have captured and do not want to have in your starting lineup, made up of up to six of them. Of course, from any base camp you can change in real time without having to return to the town. During the trailer you can see what they look like in action.