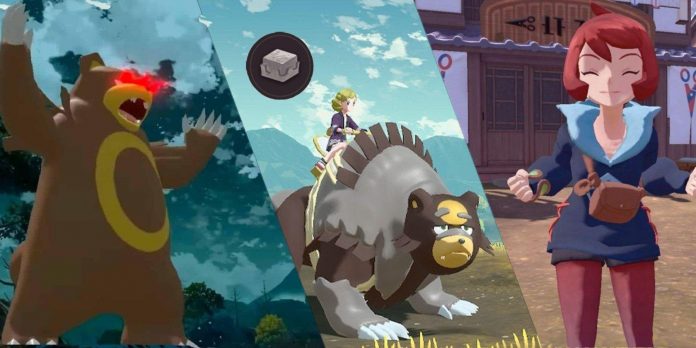 How to Evolve Ursaring into Ursaluna Where to Get Ursaring A Closer Look At Teddiursa, Ursaring, And Ursaluna

Pokemon Legends: Arceus features several new Hisuian forms or evolutions for existing creatures, and while some of them retain their original evolution methods or have more straightforward ones, evolving Ursaring into Ursaluna is not as easy. Ursaluna is one of the noble Pokemon in Pokemon Legends: Arceus, and players can start riding one as early as the Crimson Mirelands. For those players who want an Ursaluna on their team, however, they can check out this quick guide to learn how to get Ursaring to evolve.

Updated June 23rd, 2022 by Russ Boswell: Although there are many Pokemon fans anxiously awaiting the release of Pokemon Scarlet & Violet, there are tons of players that are just now starting their adventure through Pokemon Legends: Arceus, after doing everything they possibly could in Pokemon Brilliant Diamond & Shining Pearl. Although it’s a bit different from the mainline games, there is still a ton to do in Pokemon Legends: Arceus, with new and interesting Pokemon to catch thanks to the Hisuian regional variants. Those that enjoyed Ursaring received a new final evolutionary stage for the Pokemon in Ursaluna. To better showcase how players can evolve Ursaring into Ursaluna, as well as showcase the stats for the new form, the following guide has been updated.

How to Evolve Ursaring into Ursaluna

For starters, there are two requirements to having Ursaring evolve into Ursaluna in Pokemon Legends: Arceus. One is to have a Peat Block available, and the other is to use it on an Ursaring while there is a full moon in the night sky.

RELATED: Pokemon Legends: Arceus – What Are Colored Shards For (And Where to Get Them)

How to Get Peat Block

The Peat Block is a rare item that players can only find if they are riding Ursaluna, as it is part of the buried treasures loot pool. Because Peat Blocks are extremely rare to come by and there is no guaranteed way to get one, as it’s not one of the evolution items sold by Simona in Jubilife Village, players should ride on Ursaluna as long as possible.

There are ways to optimize chances to find a Peat Block, however, as players can go to a few specific areas in the Crimson Mirelands to look for buried treasure, as those are often locations where Ursaluna finds something. The quickest and most efficient way is to start at the Golden Lowlands, then search between the Gapejaw Bog and the Sludge Mound, and then go to Ursa’s Ring.

If players don’t find a Peat Block in these three areas, they can go back to Jubilife Village and then travel to the Crimson Mirelands once more, repeating the previous steps.

How to Get Full Moon

Once players have a Peat Block, the next step is to make sure they use it on an Ursaring while there is a full moon in the night sky. There is a quick way to do that in Pokemon Legends: Arceus, which is to rest at one of the camps in the Crimson Mirelands. Players should rest until nightfall, then head to Brava Arena – meaning that ideally, they should complete the Arezu’s Predicament mission – and look towards the mountains to see what the moon looks like.

If there’s a full moon, they can simply use the Peat Block on an Ursaring on their team. If not, they should pay attention to what the moon looks like and compare it to the lunar cycle to understand when they can expect a full moon next. At that point, players can head back to the camp, rest until morning, midday, or evening, and then rest once more until nightfall and head once more to Brava Arena, where Hisuian Lilligant is originally located.

Just like in real life, Pokemon Legends: Arceus’ moon goes through its lunar cycle, albeit it’s a much shorter cycle than that of the real world. There are seven main phases the in-game moon can be in: waxing crescent, first quarter, waxing gibbous, full moon, waning gibbous, third quarter, and waning crescent — always in this exact order. Depending on which one the players encounter as their first attempt, it can take a few more tries at resetting it to get it right by resetting the time of day at the camp.

Once the full moon peeks from behind the mountains, players can finally use their Peat Block on their Ursaring, evolving it into Ursaluna. This is also quite fitting with the Pokemon’s design, considering it looks like it has a full moon on its forehead, and its eyebrows look like clouds in the night sky.

Where to Get Ursaring

If players don’t have an Ursaring to evolve into Ursaluna, they can find one quite easily in the Crimson Mirelands. There are two locations where Pokemon Legends: Arceus players can find an alpha version of Ursaring – namely, the Gapejaw Bog and Ursa’s Ring. Regular Ursaring can also appear in the latter.

Otherwise, Teddiursa spawns rather consistently in Ursa’s Ring, Gapejaw Bog, and between Sludge Mound and Scarlet Bog, along the riverside. Teddiursa evolves into Ursaring at level 30, meaning that players can have an Ursaluna as early as the same level Teddiursa evolves.

A Closer Look At Teddiursa, Ursaring, And Ursaluna

Players that are looking for a solid counter against Ghost and Electric-type Pokemon should consider slotting an Ursaluna into their Pokemon Legends: Arceus team. The dual Ground and Normal-type has an immunity to both Electric and Ghost moves, as well as a resistance to Rock and Poison-types. Unfortunately, it does carry some weaknesses to Fighting, Water, Grass, and Ice, at a 2x damage multiplier for each, but players that are aware of its weaknesses can build a great supportive team around the final evolution of Teddiursa.

Although Ursaluna doesn’t have an exceedingly high Base Stat Total, it does boast some impressive HP and Attack. With access to some punishing Normal and Ground-type moves, Ursaluna can be great physical attacker. Unfortunately, players will have to account for its abysmal speed. However, its bulk should help it withstand a hit or two so that it can retaliate and dish out some serious physical damage.

Here’s a better look at the stats for Ursaluna and each of its previous evolutionary stages:

Pokemon Legends: Arceus is available now for the Nintendo Switch.

Tokyo Game Show 2022: everything is announced

Don’t Look Up, Criticism. A Terrifying And Forceful Satire Of Our...