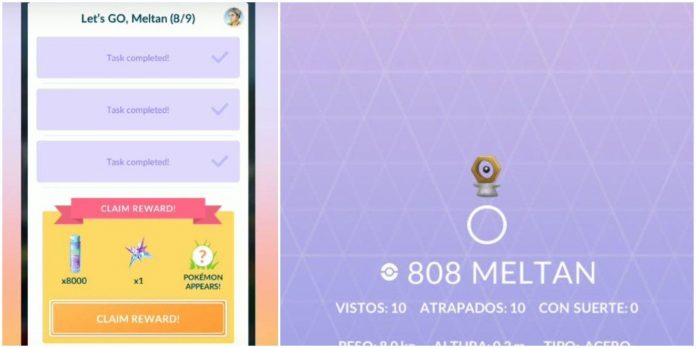 The main goal for some Pokemon fans is to go through the entire pokedex of the corresponding region, but for others — to test the strength of their Pokemon in competitive PVP battles. This makes the Pokemon franchise one of the best in the gaming industry, as it is suitable for all types of players. Even Pokemon GO allows players to choose a style of play, whether it’s a “must catch them all” mentality or an attempt to become the best Pokemon trainer.

Regardless of the player’s style, one thing is for sure: everyone wants to catch a rare, especially mythical Pokemon. Meltan is one of the mythical Pokemon, exclusive to Pokemon GO, which players will want to get. But the only legitimate way to get Meltan in Pokemon GO is to do a special “Let’s Go, Meltan” study.

The first step to completing the special study “Let’s go, Meltan” is quite simple. When spinning these Pokestops/Gyms, it doesn’t matter if the players repeat the same ones. When capturing 10 Pokemon, they can either wait for the Pokemon to appear “naturally”, or use bait/incense.

For the latter goal, players need to transfer five Pokemon by clicking on the Pokemon and then selecting “Transfer”. Transferring Pokemon is a good way to grow candy, so players should transfer Pokemon that will give them the candy they need. After completing these steps, players will receive 1000 stardust, 10 pokeballs and 1 incubator.

The next part of the special research quest “Let’s Go, Meltan” begins with the coach earning two candies with his buddy, which is done by walking. The walking distance depends on the Pokemon (legendary and mythical Pokemon require longer walks), but trainers must complete this task quickly while adventure synchronization is enabled.

Following this goal, players will need to make 10 excellent throws (catching Pokemon is optional). Finally, in order to hatch eggs, players must equip 2-kilometer eggs and use the incubator with the reward from the previous step. After completing these tasks, players will receive 2000 stardust, 2 lucky eggs and 1 fast TM.

Catching Ditto is probably the most difficult goal in the entire “Let’s Go, Meltan” quest line, since there is no way to increase the chances of one of them appearing (some players believe that it is 0.3%). The only viable method to catch Ditto is to catch every Pokemon the player sees, as well as use incense and bait, since Ditto disguises himself as a random Pokemon.

While players are hunting for the elusive Ditto, they can complete two other tasks. As long as the trainers don’t place their best Pokemon defenders in the gym, players shouldn’t have much trouble aiming for the gym battle. Completing these steps will reward players with 10 Great Balls, 3 Incense and 3 Max Revives.

You can easily catch five steel and five electric Pokemon using the magnetic bait module, which players can buy with PokeCoins. Magnemite, Magneton and Togedemaru belong to the double steel/electric type, so catching any of these types will be counted to achieve both goals.

Once again, the players are faced with the task of earning candy with their buddies, but this time they need to earn five. Trainers can achieve this faster by using Pidgey, Rattata or Zigzagoon as a Pokemon buddy, as they only need to walk 2 km to get candy. The rewards for this step are 4000 stardust, 5 pinup berries and 5 rare candies.

The first task shouldn’t be too difficult, as players can turn Grimmer into Flour for 50 Make-up candies. If the player does not have enough candy to develop the Grimer, he can either give him rare candy (earned for completing raids), or make him a Pokemon buddy and earn candy while walking.

While earning Grimer Candies, players must keep an eye out for Slugma or Gulpin, as they will need to catch five (both count towards the total). Players must complete the last task, aiming to make great throws, as they will need 20. The rewards for completing are 5000 stardust, 20 excellent balls and 5 bait modules.

And again, players will need to develop Pokemon if they want to complete the quest line “Let’s go, Meltan”, but this time it’s Magnemite. Trainers will need 25 Magnemite candies to be able to turn Magnemite into Magneton. Players who lack candy can use the magnetic bait module to attract Magnemites.

The Batman: Matt Reeves Reveals That A Crossover With The Joker...