Home Entertainment Pokémon GO: A guide to the events of the 6th anniversary with... 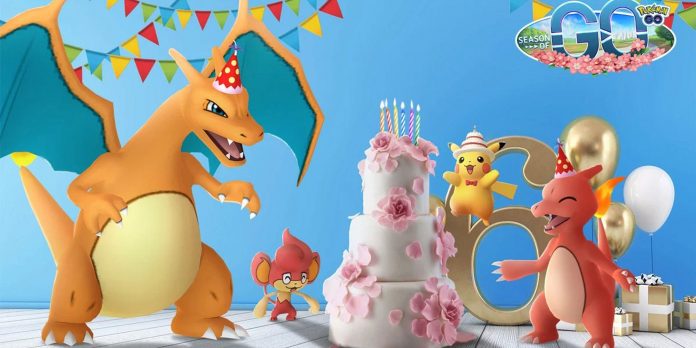 From 10:00 on Wednesday, July 6, to 20:00 on Tuesday, July 12, players can take part in the event dedicated to the sixth anniversary of Pokémon Go. The Pokémon Go game was launched in the summer of 2016, and since then its popularity and scale have grown, including Pokemon from nine different regions of the Pokemon universe and holding events around the world to bring players together. To celebrate its sixth birthday, Pokémon Go is celebrating its sixth Pokemon: Charizard. To give Charizard and Pokemon has an unforgettable birthday, players can take advantage of several bonuses and some new features during the event window.

To participate, players need to log into the Pokémon Go app during the sixth anniversary celebration, from July 6 to 12. It starts at 10:00 local time and ends at 20:00 local time. In the Pokémon Go app, players can get several bonuses, catch new Party Hat forms of some of the most beloved Pokemon in the franchise, and find other rare and shiny Pokemon more often.

Pokémon Go has a history of giving bonuses and dropping rare Pokemon on the anniversary, so players should take advantage of this until the end of the event window while they can.

As Pokémon Go celebrates its sixth anniversary, the limited-time event will be dedicated to the sixth Pokémon Charizard, as well as many other Pokemon from different generations. There will be new avatars and stickers to send to friends, as well as bonuses for events, such as players will be able to find and catch the next Pokemon more often from July 6 to 12:

Some of these asterisk-marked Pokemon are also more commonly seen in their shiny form in the wild during a limited-time event celebrating the sixth anniversary of Pokémon Go. In addition to the Pokemon Shiny and Party Hat, players can fight in the following raids:

Pokémon Go players can also complete field research tasks that lead to meetings to catch all the starting Pokemon from various games. In many of these meetings there can also be brilliant Pokemon.

In addition to searching for new Pokemon in the wild and in raids, players can take part in Battle Weekend from Saturday, July 9, to Sunday, July 10. This weekend, players will be able to:

Players will also be able to learn more about Giovanni, the leader of the Rockets, and rescue Shadow Latias from Giovanni’s clutches.

Voice of Cards: The Isle Dragon Roars, Analysis. D&D With The...