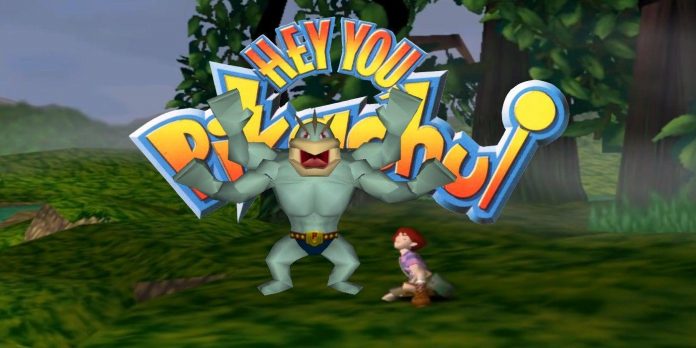 Nintendo has announced that on June 24, the original Pokémon Snap will be the first Pokemon game on Nintendo Switch Online, which will give rise to speculation about which games may appear next. Since the release of Pokémon FireRed and LeafGreen in 2004, the company has been bringing old portable versions of the popular monster taming franchise into the modern era with remakes and ports. , Pokémon Snap was the only Pokemon game designed not for portable devices that was included in the catalog of old Nintendo games for the Wii U virtual console. Despite this, there remains a possibility that the adaptation of Snap for the current generation of consoles may present similar prospects for its Nintendo 64 relatives; but what?

It’s easy to see how timely the transfer of the rail “shooter” spin-off for the Nintendo 64 is. New Pokémon Snap, the sequel to the game for modern Pokémon fans, was released in April 2021. In addition, between the successful release of Pokémon Legends: Arceus in March and the upcoming release of Pokémon Scarlet and Violet, scheduled for November 18, 2022, it will be a busy year for those who follow the series as a whole. But Snap is not the only past Pokémon piece that could take advantage of the current momentum of the franchise and find a new, suitable place for itself.

If released on Nintendo Switch Online, a similar Snap release for the Nintendo 64 Pokémon Stadium could fill a niche, providing an exciting combat experience that many old fans lack today. Since Pokémon Ruby and Sapphire introduced Exp in 2002. Share — initially an impressive item for Pokemon, which, as the name suggests, allowed one Pokemon to gain experience in battles in which he did not participate — in the main series there were features that make it easier to build a team with each release. These changes are somewhat understandable, since the series is aimed at a younger audience — and even among adult players, the more time-consuming aspects of Pokemon training, such as leveling, are not for everyone. However, not all of these changes are mandatory, which is disappointing for a large number of players who find satisfaction in the focus and planning elements that are required to train a strong team in older versions of the series.

Released in August 1998, Pokémon Stadium today is often referred to among fans of the series as one of the most difficult Pokemon games. The random number generator behind determining critical hits, evading movement, and applying status effects is notorious in favor of the computer. This source of complexity places an even greater responsibility on the player to assemble the most cohesive team if he wants to win in the gym leader’s castle and in all the cups of the stadium mode. As released, the game gives the player two options on this front: they can either assemble a team from the built-in stable of “rented Pokemon”, or import their own from Pokémon Red, Blue or Yellow.

Although transferring Stadium to the Nintendo Switch may not necessarily remove the option to import Pokemon for players, its preservation should most likely be accompanied by strict restrictions: namely, for Pokemon from the original Pokédex of 151, only with movements represented in Pokémon Red and Blue. In any case, modern stadium players should approach the game with a pool of Pokemon and movements that they may not consider optimal; and such an experience may appeal to the same types of players who like independent Pokemon trials, such as passing one type and the popular Nuzlocke challenge, which includes a limit on the number of Pokemon a player can own among its general rules.

Hey, Pikachu! Modifications will be required to go online

Hey, Pikachu! — this is another Nintendo 64 by-product that will require changes to be ported to the Nintendo Switch Online. The nature of these changes means that such a port is probably unlikely, but they can have an interesting impact on the game and its perception.

Hey, Pikachu! portrays the player as a human child who has made friends with a wild Pikachu, with whom they communicate verbally. The Pokemon pet simulator received mixed reviews during its release in December 1998. Some appreciated the unique gameplay elements and its low-key, slice-of-life format, while others found that it had little appeal beyond its young target audience and that this gameplay was limiting and at times frustrating, as the Nintendo Voice Recognition Unit (VRU) add-on was limited and unreliable when identification of voice input.