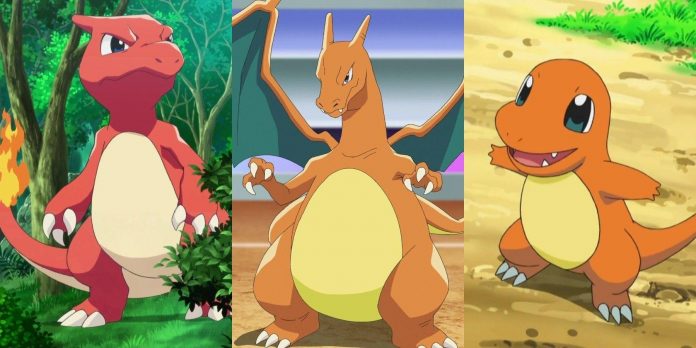 Halloween season is coming soon, and one Pokemon fan decides to give Charmander and his evolutions a disgusting look. While Charizard already has an intimidating dragon-like appearance, this new work from a fan artist has made even the smaller and cuter Charmander and Charmeleon look intimidating.

Recently, scrazyone1, an artist on Reddit, shared a collection of pictures showing these creepy images of Charmander, Charmeleon and Charizard. According to the artist, 3D graphics were used in the project, and as a result of the transformation, the Pokemon looked at least creepy.

In one of the images posted on Reddit by user scrazyone1, all three Pokemon from the Charmander evolution line were standing, looking menacingly at the camera. However, these Pokemon differed significantly from their versions in the Pokemon franchise, as their traditional color schemes were replaced by a shade of black. In addition, bones representing the skeletal system of Pokemon were visible in the drawings, which enhanced the creepy nature of the artwork. In addition, the fire at the tip of each Pokemon’s tail got a much darker and muted shade.

More photos of Halloween-themed artwork can be found in the original post.

As if that first picture wasn’t enough, scrazyone1 posted a number of other images of their Pokemon 3D images on Reddit. For example, they placed a close-up of each part of the Pokemon in the evolution line, which allowed fans to get a closer look at the design. In addition, there was a photo showing Charizard, Charmander and Charmeleon before they were given their Halloween-style colors.

Many gamers who are ready for the Halloween season have noticed this creepy illustration of the Charmander evolution line on Reddit. For example, one Pokemon fan said that his son thought the fan art looked so good that it looked like a set of toys. In addition, some thought that the design resembles Delta Charmander from the Pokemon Insurgence fan game. In fact, so many gamers liked the appearance of these Halloween-themed Pokemon that the post managed to collect more than 10.8 thousand votes in just a few hours.

As Halloween approaches, it will be interesting to see what other drawing fans will create based on the creepy time of year. Before sharing their Charmanader artwork, scrazyone1 posted on Reddit several photos of a Halloween-themed Bulbasaurus and its evolutions that they created, with pumpkin lanterns instead of plant bulbs. Time will tell what other impressive and scary works of art this and other talented artists will create in a few weeks before October 31.

BTS Concert: How To Buy Tickets For Permission To Dance on...