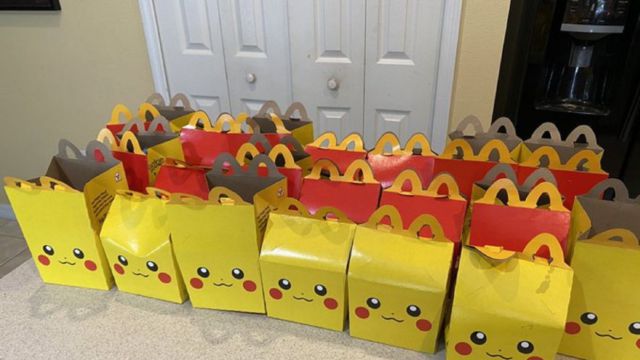 Pokémon Cards: The restaurant chain does not want a repeat of what happened in the United States, where customers bought menus with the defendant toy massively.The McDonald’s fast food restaurant franchise will restrict the purchase of the famous Happy Meal children’s menus in the UK as soon as the imminent Pokémon card promotion kicks off to avoid speculation. As happened in the United States in February, the mini-expansion of the Trading Card Game on the occasion of the 25th anniversary of Pokémon will be very limited, according to VGC: only one menu per person.

Fans of collecting Pokémon cards, especially those with a limited distribution – which increases their rarity – will be able to go to McDonald’s in the United Kingdom from this May 19 to get 4-card packs of the 25th Anniversary expansion, consisting of for 50 cards (the 25 initial Pokémon of the saga and its shiny variant). Not all of them will be identical to each other, however.

Apart from the 25th Anniversary seal, which will characterize these fifty cards, some may come out foil (with shiny finishes) randomly. This is what speculators are looking for, the rarest cards, to sell them at exorbitant prices in the buying and selling markets. This expansion has the main incentive of betting on

What’s happening to Pokémon cards in the world

Speculation has been hitting the Pokémon Trading Card Game scene severely for about two and a half years. The first edition (1st Edition) of the first Base Set (TCG) collection, consisting of 102 cards, is highly coveted among collectors; especially with the holo (holographic, glowing) versions of creatures like Charizard, Mewtwo, Venusaur or Pikachu.

In recent times we have seen a growing trend towards the so-called openings of envelopes and boxes, a type of videos that we have been watching on YouTube for more than a decade, but these openings now have the added interest of not being only about the new expansions of the game, but of those expansions of the past whose rarer cards can be sold in the trading markets for thousands (or tens of thousands) of dollars.

The situation especially affects regular buyers who either collect or compete, but who in no case seek to speculate. The result is none other than lack of stock. Players do not find packs according to which expansions, while the most coveted cards, which once sold for $ 20 or $ 30 (something that was worth it to competitors to save the money of a multitude of card packs, was profitable), now they amount to three figures.

Danila Kozlovsky is proud of the movie “Chernobyl Abyss”!

Adventures on the road: When the journey is destination