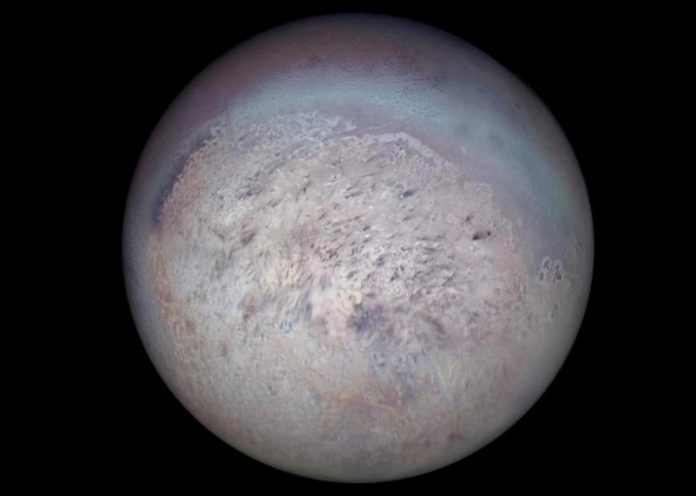 The mist enveloping Pluto could be made up of ice crystals with cores of cyanide, according to a new study.

Mists, which are made up of tiny particles of dust, smoke, ice, and other substances, are not unique to Earth – scientists have detected mists enveloping Mars, Venus, Saturn and Jupiter.

Mists aren’t limited to planets, either. Saturn’s largest moon, Titan, the only moon known to have clouds, is shrouded in thick, smog-like orange haze on Earth. The Voyager 2 spacecraft of the NASA also detected haze in the atmosphere of Neptune’s largest moon, Triton.

NASA’s New Horizons mission, which flew near Pluto in 2015, unexpectedly revealed that Pluto also possesses haze surrounding the frozen surface of the dwarf planet. Since Pluto, Titan, and Triton are all icy worlds with atmospheres rich in nitrogen, methane, and carbon monoxide, the researchers figured they might all have similar types of fog.

Previous research has revealed that Titan’s haze was the result of solar ultraviolet rays triggering chemical reactions in the upper atmosphere of the frozen moon. These created simple organic compounds that helped form ever larger and more complex organic molecules.

However, scientists are now finding that the fogs on Pluto and Triton could have very different origins than on Titan.

“Although Titan and Pluto seem very similar, their haze properties can be radically different,” said lead author of the study, Panayotis Lavvas.

When researchers analyzed computer models of haze formation, they found that if the same chemical reactions at work on Titan were occurring on Pluto, they could only create about half of the haze particles detected by work. earlier on the dwarf planet. (Since Pluto’s atmosphere is around 175 degrees Fahrenheit, or 80 degrees Celsius, cooler than Titan’s, its atmospheric chemistry is slower.)

In the new study, Lavvas and colleagues suggest that, like on Titan, sunlight sets off chemical reactions in Pluto’s upper atmosphere, forming simple compounds such as hydrogen cyanide, a molecule made up of one atom. hydrogen, one carbon atom and one nitrogen atom. Their models suggested that hydrogen cyanide could freeze to produce tiny particles of ice.

As these microscopic ice particles settle down due to gravity, other gases condense around these seeds to coat them. As such, the haze particles on Pluto can largely be made up of a variety of ices, instead of more complex organic compounds like on Titan. The sizes, quantities and atmospheric distributions of these ice grains in computer models closely match those of the mist particles detected on Pluto, the scientists noted.

Additionally, these ice particles on Pluto should interact less with incoming solar energy than the haze particles on Titan, the researchers said. As such, they should play a smaller role in controlling the heat in Pluto’s atmosphere than previously thought, Lavvas said.

As for Triton, since it has an atmosphere even colder than that of Pluto, scientists noted that its mists should turn out to be even colder.

“This comparison of Titan, Pluto, and Triton highlights the important differences in the mechanisms of mist formation in planetary atmospheres,” Lavvas said.