Home Entertainment PlayStation will remove Communities from PS4 in April 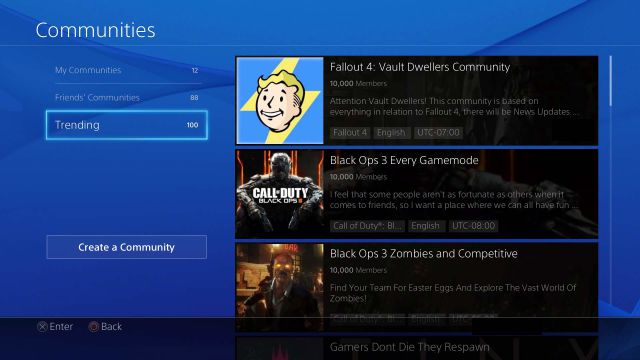 Following testing with beta 8.50 firmware, Sony informs fans that Communities will be discontinued in April.

Sony Interactive Entertainment has confirmed that it will remove the Communities feature from PlayStation 4 this April 2021. After anticipating the disappearance of this feature through firmware 8.50 in its beta version, where it was no longer accessible, it is now the Japanese company itself is making the news known to users.

From MeriStation we have received the following email: “Important changes in the PlayStation Communities on your PS4 console”, which explains the main details of the discontinuation of Communities, an option inaugurated on all PS4 consoles in September 2015 that allowed us join groups and online games with players with whom we share likes or interests. Within each Community it was possible to play the featured games online, participate in chat conversations or simply serve as a meeting point.

“Thank you for using the Communities function on your PlayStation 4 console. As of April 2021, this function will no longer be available on PS4 consoles,” they begin by saying in the communication via email. “However, you can continue to connect and use the messaging functions, among others, on your PS4 console and PlayStation App”, they expand, as with PS5, where there are no Communities.

Sony defined PS4 Communities as “sites where you can find players with similar interests and preferences. Within a community, you can play or form groups with other members of the community, or talk about interests that you have in common ”.

Back in October 2020, when update 8.00 was released on PS4, Sony removed the ability to create Private Communities; not so the public ones. As of this month of April, the day to be confirmed, it will not be possible to create or participate in Communities of any kind. The decision seems irreversible.

The future of PlayStation now passes through PS5, whose stock will remain limited until the second half of 2021. We recommend you visit this article to find out the status of the console’s stock in the main chains in Spain.

Who is rumored to be Union Jack, the character in Olivia...