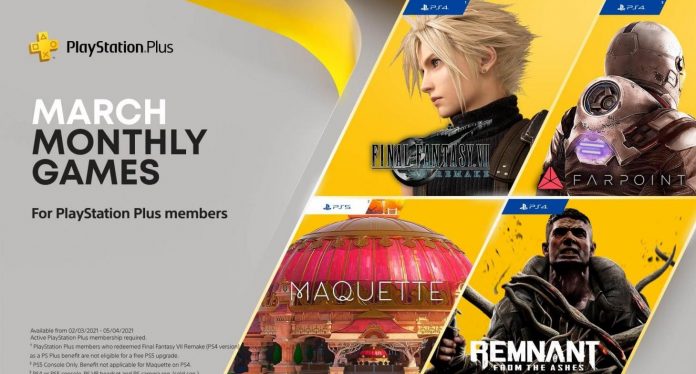 This is the big day ! With February slowly but surely approaching its end, the time has come to know the four new free games that will be waiting for PlayStation Plus subscribers starting in March.

When there are no more, there are still! In recent days, PlayStation has not failed to find itself at the heart of the news by increasing the number of announcements and speeches. Between the broadcast of a new episode of State of Play or the return of the Play At Home initiative which will allow players to get Ratchet & Clank (2016) for free next month, there has been plenty to do. But today, Sony is raising the stakes for PS Plus subscribers even further by unveiling the next round of free games which will be offered free of charge from March 2 to April 5, 2021. And as insistent rumors announced, Final Fantasy VII Remake will definitely be part of the bundle for PS4 and PS5 players. Important note, however: this version will not give you access to the free upgrade on PS5.

Still for PS4 players (knowing, let’s be clear once again, that PS5 players can also enjoy it), two other titles can be recovered. The first, Farpoint, is a VR FPS developed by Impulse Gear in 2017. To be able to play it, you must therefore have PS VR equipment. The second, Remnant: From the Ashes, is a post-apocalyptic TPS developed by Gunfire Games in 2019, playable solo or in co-op with other players. Finally, exclusively for the happy owners of a PS5, it is Maquette which will be available for this month of March. This new title developed by Graceful Decay takes the form of a recursive puzzle in FPS view and is described by the developers as “a modern love story, where the slightest worry can sometimes become an insurmountable obstacle”.

By the way, don’t forget that you only have a few days left to get your hands on February’s PS Plus games, Control (Ultimate Edition) and Concrete Genie, which will be phased out on March 1. However, you still have until April 6 to download Destruction AllStars, which is only playable on PS5 but can be picked up on PS4 until you get one. Moreover, in case you missed the information, PS5 restocks are apparently planned for this week in several stores. And if none of the games on the list appeal to you, you can always indulge yourselves by taking a discount on a PSN card worth € 50 thanks to Eneba.