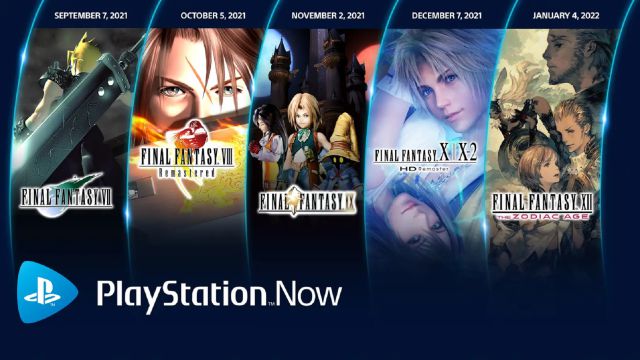 Fantay VII Final – September 7
The original 1997 title plunges us into an environmental conflict caused by the Midgar company, which is absorbing the life energy of the planet. Cloud, Tifa, Barret and the rest of the AVALANCHE members will join the fight to live an adventure as dangerous as it is exciting.

Final Fantasy VIII Remastered — October 5
Squall is a student in the Balamb Garden, a place where warrior seeds train to fulfill their military contracts. However, his true goal is to destroy the terrible witches. Nothing is what it seems, something that the protagonist and the group will soon discover. He travels the world and fights all kinds of creatures as you discover the truth.

Fantay IX Final – November 2
The Kingdom of Alexandria lives in times of darkness. To the apparent madness of the queen we must add the kidnapping of Princess Garnet, a kidnapping that was planned, but in which the princess herself participates of her own free will. Along with the rest of the band, Yitán and his companions will make an introspective journey to discover who they really are.

Final Fantasy X / X-2 Remastered — December 7
The two installments set in Spira have a very different tone, but both share some of their main characters. Yuna, a summoner, is destined to give her life so that the monster that will destroy the world sleeps for a few years. On her way, she will meet Tidus, who will accompany her throughout the entire pilgrimage.

Final Fantasy XII: The Zodiac Age – January 4
The Kingdom of Dalmasca has been conquered by the mighty Arcadia Empire, which has plunged the territory into ruin. The heir to the throne, Princess Ashe, does not hesitate to join the resistance to try to free herself from the bonds. Meanwhile, Vaan dreams of taking to the skies, something that she will finally achieve, but at what cost?

PlayStation Now allows streaming games to be played using PS4, PS5 and PC. They can also be downloaded to the console’s hard drive to play locally.