Home Sport The player named McDonald changed his name on the jersey when his... 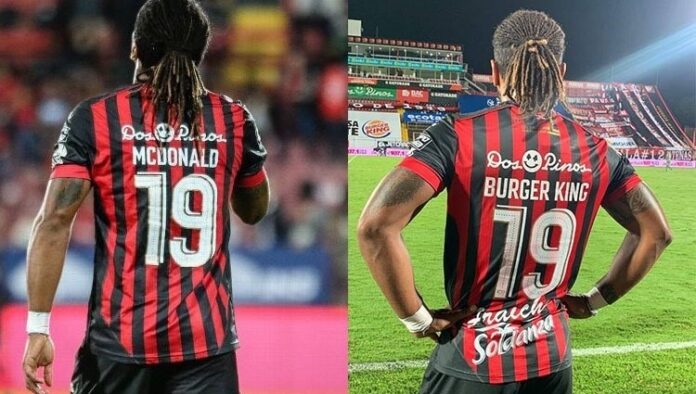 The Costa Rican Premier League (Liga FPD) hosted an interesting Burger King commercial in the match between Alajuelense and Saprissa this week. McDonald, who was a striker in the team of Alajuelense, changed his name to Burger King as a result of sponsoring Burger King.

An interesting advertising campaign came up in the match between Alajuelense and Saprissa teams in the Costa Rica Premier League this week. Alajuelense and Saprissa match; The behavior of the ready-made food giant Burger King was remembered, not with the behaviors, goals scored or interesting positions. Jonathan McDonald, 32, appeared in one of Burger King’s latest marketing campaigns.

It was seen that Jonathan McDonald, who was included in the game 18 minutes before the end of the match, changed his name on Burger jersey to Burger King. Although the match between Alajuelense and Saprissa is one of the important matches of the Costa Rica Premier League, Jonathan McDonald’s ‘Burger King’ shirt was featured in all headlines.

A strange advertising campaign in the Costa Rican Premier League:

A lot of posts were made on Twitter about this interesting event in the match played. Thanks to this advertising campaign, we have seen that creativity and effort can reach very different dimensions when it comes to fighting Burger King’s biggest rival, McDonalds.

In 2016, Burger King launched Zenit St. Petersburg to launch a global advertising campaign. Petersburg offered 6.8 million pounds for their team to change their name to ‘Zenit Burger King’ and add the Burger King logo on their team crest. Naturally, even though these requests were not accepted by the Zenit management, Burger King had reached his goal in a way by mentioning himself on social media for a while.

It is reported that the SEC football stadium has sold the...

NFL World’s Reaction to What Bill Belichick Said about Fantasy