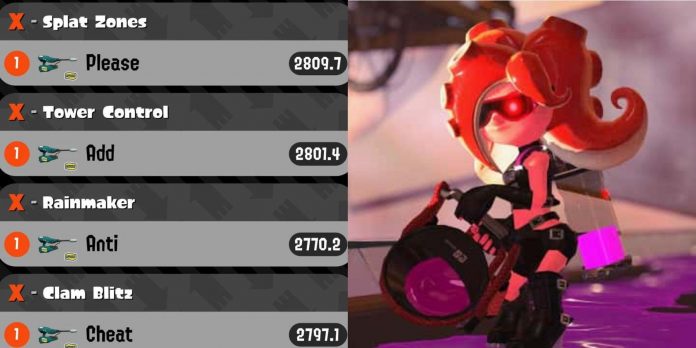 Splatoon 3 will be released on Nintendo Switch very soon, and many were surprised to learn that cheaters are already being banned even before the game is released. This is due to the early demo version of Splatoon 3, which allowed players to hold Splatfest from August 27 to 28. Players had to choose between a rock, scissors or paper, and then fight. Some decided to cheat using a custom patch that gave them even earlier access to the training lobby.

Then Nintendo proved that cheating is generally unacceptable, since they not only permanently banned players in the Switch online multiplayer, but also banned them on their own consoles (this means that their devices will not have access to Nintendo’s online services). While most are now eyeing Splatoon 3’s anti-cheating methods, Splatoon actually has a long history of cheating.

Back in 2018, Polygon published an article titled “Splatoon 2 hackers are a big problem, and players need help.” According to the article, hackers not only cheated to win, but also found ways to manipulate the reporting system. All of this led to a moment that is hard to ignore, as the fan managed to hack into the public player leaderboard and display the message “Please add anti-cheat” as his username. This user, PleaseAddAntiCheat, wrote more of his thoughts on the Splatoon subreddit, stating that, in their opinion, someone needs to deliver a loud message to Nintendo.

It was eventually confirmed that PleaseAddAntiCheat was blocked in the Splatoon 2 multiplayer game for hacking leaderboards. According to other Reddit users, it can be difficult to tell the difference between lagging and cheating in a game. It can also be difficult to distinguish a hacker from just a very experienced player, although some claim that scammers can expand the range of their weapons or even become invisible. However, many claimed on the forums that fraud practically does not exist, despite the situation with PleaseAddAntiCheat and the Polygon article, which says the opposite.

What may be true for Splatoon 2 is that hackers are just hard to recognize. It seems that most of all it is recognized by other people who are able to hack, for example, PleaseAddAntiCheat. This could make it difficult for Nintendo to have an effective fraud protection system, as players can easily report someone who is just very skilled at the game, or not report someone because they didn’t notice the hack.

Cheating in the Original Splatoon

The original Splatoon game for Wii U was best known by cheaters. Five years ago, Reddit users wrote that they were horrified by the legacy of the original game. Cheaters could gain super speed, instantly cover cards with ink, and even gain invulnerability, which allowed them to swim in opponents’ ink. At that time, hackers even had ways to lift the ban by changing the text in a certain file. Many players were understandably upset, and this gave them little confidence in Splatoon 2.

This shows how much Nintendo has learned to deal with scammers. One of the main reasons the cheating in the original game was so terrible was that Nintendo had a lot to learn, since Splatoon was the first game in the series and the Wii U was a system other than the Nintendo Switch. Thanks to Splatoon 3, Nintendo not only has more experience with the series, but also more experience with Nintendo Switch and potential fraud methods. Judging by the bans after the demonstration, it seems that the cheaters in Splatoon 3 will be dealt with quickly.

Splatoon 3 will be released on September 9 on the Nintendo Switch.

Yamato’s Great Power Came Out Of Wano In This One Piece...